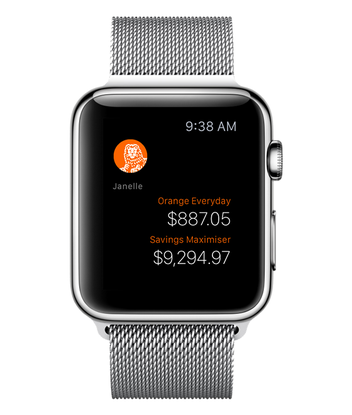 The app can be configured to display a range of account balances such as savings and everyday accounts.

According to the company, over 70 per cent of mobile interactions are made by customers using Apple devices.

An ING Direct spokesperson said it was "always looking" at what’s next, but it has to fulfil a demand and add value to our customers.

"We’re focused on understanding how people interact with their finances on the Apple Watch and if their behaviour changes – that will shape any future developments," said the spokesperson.

ING Direct also announced the launch of a one swipe banking widget for Apple devices. This allows customers to check their transaction account, savings, mortgage and superannuation balances by swiping.

This means customers don’t have to unlock their iPhone or open their ING Direct mobile banking app to check their balances. However, the one swipe feature is not activated by default and is only made available to customers who configure it through their iOS 8 notification centre.

According to ING Direct customer delivery executive director Lisa Claes, the widget was created due to customer demand.

“Our customers want ease and simplicity, with balance checking being towards the top of the list,” she said.

ING Direct has been contacted for more information about the Apple Watch app.

Westpac’s app provides customers with information about where to find their nearest ATM or branch and a Get Cash code. Get Cash allows customers to withdraw cash from a Westpac ATM without a card.

In addition, customers can use the app to receive travel notifications at the airport and to advise Westpac of their travel plans prior to heading overseas.

Meanwhile, St.George’s app includes Quick Balance- which allows customers to view up to two account balances- and an ATM/branch locator.

The Commonwealth Bank of Australia (CBA) has previously said it has an Apple Watch app under development.

Analyst firm Telsyte has predicted that the Australian 'smartwatch' market is set to exceed $400 million by 2018.