Hyundai becomes first to use Android Auto in production cars

Hyundai will begin using Android Auto in its Sonata infotainment system, making it the first carmaker to use it in production vehicles. 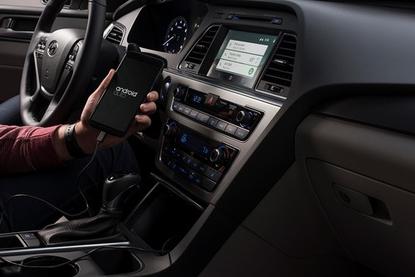 Hyundai today announced it will begin using Android Auto in vehicles this year, making it the first carmaker to enable vehicles to mirror a connected Android smartphone to the car's dashboard infotainment system.

Android Auto is premiering on the 2015 Sonata with navigation capabilities at dealerships nationwide, and will later become available on other Hyundai models, the company said.

First announced in June 2014, Android Auto (compatible with version 5.0 "Lollipop" and later) is supported by the Open Automotive Alliance, a group made up by Audi, General Motors, Honda and Hyundai, as well as Google and several technology companies.

Android Auto competes with Apple's CarPlay, and other open source standards such as MirrorLink or GENIVI, all of which enable vehicle infotainment centers to mirror a version of a smartphone OS onto a vehicle's head unit. By mirroring the mobile OS, drivers can use mobile applications, such as Google Maps or iTunes through the vehicle's infotainment system.

In the past, Hyundai also said that Apple CarPlay would be offered as an option on the 2015 Sonata.

Hyundai first announced its alliance with Android Auto a year ago.

"Android Auto aligns with Hyundai's core interior design principles of safety, intuitiveness and simplicity," Hyundai Motor America CEO Dave Zuchowski said in a statement. "We launched this highly anticipated feature on our best-selling Sonata, adding to our promise of value. With the launch of Android Auto, we provide more owners with the experience of cutting-edge technology."

Hyundai argues that allowing vehicle infotainment systems to mirror the Android OS not only offers real-time navigation updates, search and entertainment, but will increase safety by removing the desire to look at a smartphone while driving.

Hyundai claims 660,000 drivers are using cell phones or manipulating electronic devices while driving, a number that has held steady since 2010.

"Android Auto helps keep drivers' eyes and attention on the road by integrating the advanced driving-related functions of the user's smartphone with the familiar centralized screen, physical controls and microphone of their car," Hyundai said in a statement. "Furthermore, the smartphone's screen becomes "locked,' so drivers are not tempted to look down and interact with their phones directly while Android Auto is in use."