Altek's Cubic Live can be attached to drones, dashboards or handlebars 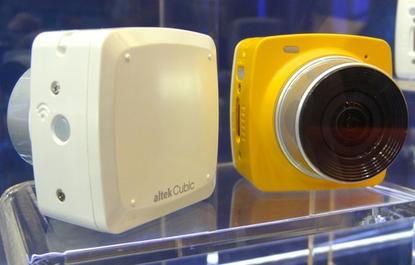 Shown off at Computex 2015 in Taipei June 3, the Cubic Live camera from Taiwan's Altek can stream live video to YouTube. It will be priced around US$130.

If you aren't a big fan of flying drones, consider that more and more of them will likely be streaming live high-definition video to YouTube.

Taiwan's Altek is demonstrating a low-cost, lightweight compact camera that can ride on a drone, dashboard or bicycle while sending real-time imagery to the video-sharing service.

The Cubic Live weighs 70 grams and easily fits in the palm of your hand. It's got a 150-degree wide-angle lens, 16-megapixel CMOS sensor and can shoot full HD video at 1080p with 30 frames per second.

The camera has a noise-cancellation chip to reduce the hum from drones. It can connect with Android and iOS mobile devices via dual-band Wi-Fi. The 940 mAh battery can last about 90 minutes when continuously shooting FHD video, or taking up to 1,000 photos.

At a demonstration Wednesday at Computex 2015 in Taipei, Altek staffers flew a DJI Phantom 2 drone with the camera on board. The drone itself was operated with its remote-control unit, while the Cubic camera was controlled via a linked smartphone. Meanwhile, the device showed the live view from the camera, displayed in a YouTube window. There was virtually no lag in the video.

It isn't the first time drones have streamed live video -- DJI's Phantom 3, announced in April, can record 4K video and stream it in near real time but it comes with a proprietary camera and costs US$1,000 or more.

The Cubic Live will go on sale in July in Taiwan, with overseas sales still being planned. It will sell for around US$130.