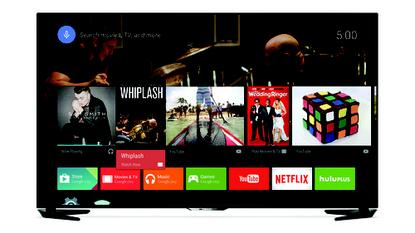 With its entry into the market of 4K high definition television sets, Sharp Electronics has elected to use Google's Android TV operating system to run the higher-end models, bringing computer-like functionality to these devices.

Tuesday, Sharp announced that it is shipping nine new ultra-high definition televisions, ranging in size from 43 inches (109 centimeters) to 80 inches. The televisions all feature the new 4K display technology, meaning each horizontal line of the display has 4,000 pixels, resulting in clear, more detailed images, compared to earlier generations of HD sets.

Two of the series in the fresh line-up, the UH30 and UE30, run Android TV, Google's new Android-based operating system for smart televisions. Sharp is the third manufacturer to offer Android TV-based sets, after Sony and TP Vision.

Android TV brings many computer and smart phone-like capabilities to the television. Users can download apps and games from the Google Play store that then can be run on the television. Console-style Android games such as Final Fantasy, NBA Jam and Badland are already available for Android TV. Each television comes with 16GB of built-in memory to hold the OS, data, and programs.

The OS supports Google Cast, which provides a way to stream video content from various sources, including HBO Go, Pandora and WatchESPN, by way of the user's Android or Apple iOS-based device.

Android TV can be controlled either through the remote control device provided by Sharp, or through an Android-based smart phone.

The OS can also help with the control of the television itself. It allows the user, for instance, to select which input to use, such as an HDMI connection or the connection from the cable box.

The UE30 and UH30 line-up comes with other features as well. They both use the company's AquoMotion video enhancement technology, which can lighten the pixels within dark sections of an image, so that part of the image can be better viewed.

All models feature Bluetooth and WiFi connectivity, and come with four HDMI and three USB ports. The UH30 line comes with a SD card reader.