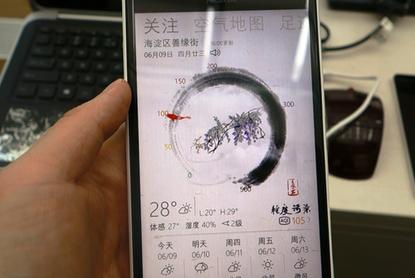 Microsoft has taken its big data analysis to China, with computing models that can forecast the air quality across 41 cities in the country.

Pollution continues to be a major problem in China, with hazardous air quality levels a common occurrence in cities including Beijing. To bring some clarity to the situation, Microsoft has come up with a mobile app that can predict the air quality two days in advance.

The Your Weather app works by first taking official data from government air quality monitoring stations across a 300 kilometer distance, and then using weather data to predict the pollution levels. The weather data used includes forecasts, along with current information on humidity, temperature and wind direction in a selected city.

Microsoft has refined the computing model over time, so that in a Beijing the air quality predictions have a 75 percent accuracy rate for a 6-hour forecast, said Yu Zheng, a researcher at Microsoft Research Asia.

It can also do forecasts two days ahead of time, but the predictions are less accurate, and provide a range estimating the upcoming maximum and minimum air quality levels for the city.

Although air quality apps are common in China, Microsoft's technology attempts to offer a more complete view of the pollution picture.

Other mobile apps offer public data from local air quality monitoring stations. But Microsoft's app will go further, and estimate the current air quality in each square kilometer across a city.

Beijing, for instance, has 35 air quality monitoring stations. But even those stations can be spread far apart, leaving gaps in city districts that have no official air monitoring, Zheng said. However, by taking weather, car traffic and city density data, Microsoft can combine it with the government air quality stats to arrive at the likely pollution rates in individual areas of a city, he added.

Microsoft's Your Weather app displays this as a colored map. Poor air quality areas appear as red or orange, while clean areas are shown as green.

The app, which is known as "Xiaoyu Tianqi" or "small fish weather" in Chinese, became available on Android two weeks ago, said Jacky Hsu, a program manager with Microsoft. The Windows Phone version, which was launched a few months ago, has 150,000 users. The iOS version will be ready soon, Hsu added.

Microsoft also has a website where users can view air quality forecasts for China.