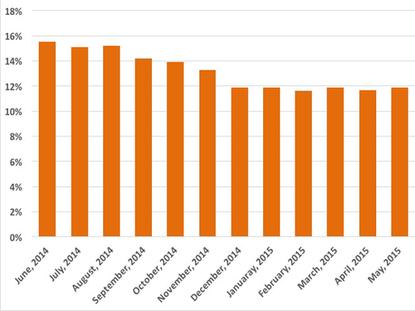 Firefox's user share has stabilized during the last six months, at around 11.9% of the global browser market.

After years of spinning its wheels, Mozilla recently stepped up work on separating page rendering from content in Firefox to make the browser more secure and more stable.

Dubbed Electrolysis, or "e10s" for short, Mozilla's attempt to bring multiple processes to Firefox got a shot in the arm last month when Chris Peterson, an engineering program manager with the open-source developer, announced that the team working on the project had been expanded.

"e10s is a priority for Mozilla's engineering management and they are dedicating more help to make it happen," Peterson said in a message posted to Mozilla's discussion development forum.

Electrolysis harks back to 2009, when Mozilla first began talking about, and working on, a multi-process Firefox. Separating rendering from content prevents the browser from crashing when a website or app falls. And when combined with sandboxing the technique can also serve as a security defense: If hackers manage to exploit a specific page or app, they should not be able to compromise the browser and gain access to the underlying system and files.

The start-stop nature of work on Electrolysis, however, has never resulted in a finished change to Firefox's architecture. The most that's been accomplished is an option in Firefox's "Nightly" build -- Mozilla's roughest-edged version suitable only for developers and hard-core testers -- to enable multiple processes.

Rival browsers already rely on a multi-process infrastructure, pioneered by Google's Chrome, which debuted in 2008 with the then-radical feature. Apple's Safari and Microsoft's Internet Explorer (IE) also run separate processes, often but not always on a per-tab basis.

When Firefox goes multi-process, it will boast only two: One to parse pages, the other for all the pages' content.

Mozilla's tentative schedule is to switch on multiple processes in Firefox 41's Aurora build later this month, and on the Beta channel with Firefox 42, slated to ship in late September. The current schedule has not locked down a date for multiple processes in the most stable Release build, but the earliest it would appear is early November.

But even as Mozilla beefed up the engineering staff working on e10s, it also appeared to be rethinking its pledge to issue a 64-bit version of Firefox for Windows.

In the company's internal documentation for a 64-bit Firefox, Mozilla now hints that the initiative might be canned. "Before we continue to invest in the plan, we need to identify the market reward to either acquire or retain users vs. the cost of getting to GA" General Audience," the document stated.

In March, Mozilla released its first developer preview of a 64-bit Windows version of Firefox.

Mozilla continues to work on improving Firefox even in the face of a declining browser user share. In May, Firefox went against the grain by increasing its global share -- as measured by analytics vendor Net Applications -- by about two-tenths of a percentage point, ending May with 11.9%, or less than half of Chrome's 26.4%. In the last 12 months, Firefox has shed about 29% of its user share.