The first commercial g.Fast services are expected next year 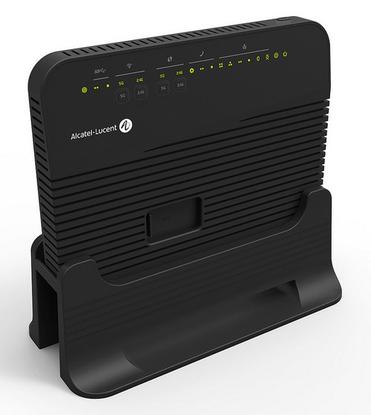 Alcatel-Lucent 7368 ISAM residential gateway works with both VDSL2 and g.Fast.

Alcatel-Lucent and chipmaker Sckipio Technologies are debuting modem technology that will help make speeds of hundreds of megabit per second over copper cables a reality.

The technology that makes it possible is called g.Fast. Step-by-step, chipmakers and equipment manufacturers are getting it ready for large-scale commercial services. They are expected to arrive next year.

After getting the network equipment to work, vendors are increasingly focusing on the modems.

Alcatel-Lucent has launched the 7368 ISAM residential gateway, which uses g.Fast and 802.11ac to offer speeds surpassing 750Mbps, it said. The product has four Gigabit Ethernet ports and two USB 3.0 ports. It can also be used to deliver broadband over VDSL2. The thinking is that operators can offer VDSL2 today and then upgrade to G.fast.

Neither company offered any details on pricing and shipping.

The speed increase offered by g.Fast is needed for applications such as streaming 4K video (and in the future, 8K video), IPTV, cloud-based storage, and HD video calls. At the International CES trade show in January, Sckipio demonstrated G.fast's ability to carry 4K TV.

Last month, Swisscom said it was testing G.fast data transmission under real conditions for the first time, offering speeds up to 500Mbps. The operator is planning to use G.fast for all its FTTS (fiber to the street) and FTTB (fiber to the home) connections from 2016. Because g.Fast performs at its best over short distances, the technology will be used in combination with fiber.

Telekom Austria also expects to launch commercial services next year. BT is a bit more cautious and has stated its first services will come next year or in 2017.