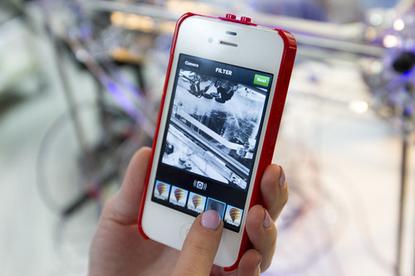 Instagram, the popular app for sharing photos with friends, is broadening the reach of those photos.

On Tuesday, the Facebook-owned app significantly expanded its service with new features around search and trending topics. The changes are aimed at letting users discover photos and videos related to popular events and places, and letting users more easily find photos taken in particular places.

The changes are aimed at making Instagram not just an app to see friends' photos, but an app for seeing other people's photos related to local or global events. The changes put Instagram's app more squarely in competition with Twitter, already known for its real-time feed of tweets around events, including photos and videos.

Users can access the changes to Instagram by tapping the magnifying glass icon in the app. On that page, the feed will feature trends as they happen in real time. On Tuesday, the new Trending Places feed included photos taken in various locales in and around San Francisco, Las Vegas, New York City and the SeaWorld theme park in Orlando, Florida.

The changes also include trending hashtags that users can click on, which on Tuesday included tags for the Coachella music festival, the upcoming Independence Day holiday, and the recent death of film composer James Horner.

There are also curated feeds of photos that Instagram says it will update regularly. On Tuesday, those feeds included photos and videos of extreme athletes and towering rocks.

Instagram's curated feeds will initially roll out only in the U.S., while the search function is available to all users worldwide. The changes apply to Instagram's app on iOS and Android.

With more than 300 million users who log in monthly, Instagram has grown massively since Facebook paid US$1 billion to buy the mobile photo service in 2012. Instagram had about 80 million users three months after the acquisition.

Facebook has been slow to place ads in the app, only recently expanding the types of photo and video advertisements available to marketers.

The new features announced Tuesday could eventually become a platform for brands to place ads tied to relevant places or events. Instagram rival Snapchat already does something similar through its live events feed, which lets marketers pay to promote their brands with photos and videos taken by users during live events.