The Upload: Your tech news briefing for Thursday, July 23 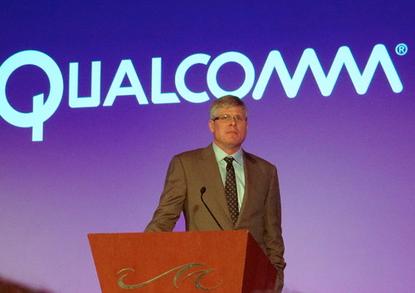 Qualcomm will lay off about 15 percent of its workforce and may separate its chip and patent businesses in a major realignment of the company that is designed to cut annual costs by about $1.4 billion. The company, a major player in technology that's used in mobile phones, will cut back the range of its investments in new product areas to focus those efforts on data centers, small cells and the Internet of Things.

Rumors started up that the U.S. Federal Trade Commission and the Department of Justice were sniffing around the deals Apple has been making for its Music service before the streaming service even launched. Since then, two U.S. states have announced probes. On Wednesday, Sen. Al Franken asked the federal agencies to probe whether Apple's licensing terms for streaming music apps put competing companies at a disadvantage, while Consumer Watchdog called on them to look into whether Apple was trying to restrict ad-supported competitors.

Oracle thinks Google should have to pay for Android's success when it comes to the long-running copyright case over how the search giant took significant chunks of Java to develop the mobile OS. It wants to update its lawsuit to reflect the huge gains Android has made in the five years since the case began, saying they strengthen its argument that Google's use of Java in Android was not protected by fair use.

Blabbing about confidential matters while someone you inadvertently pocket-dialed notes down every word doesn't make you a victim of invasion of privacy, nor does it make the listener a wiretrapper, a U.S. appeals court has ruled. The judges know you can use lock screens and other tools to prevent accidental calls from your mobile, and likened them to pulling the shades over your windows: you can only have an expectation of privacy if you take steps to ensure it.

U.S. law may ban the use of signal-jamming technology, but after drones interfered with firefighting work last week, legislators in California say it should be used to disable the flyers. A pair of bills introduced this week in the California legislature call for jail time and stiffer fines for misuse of drones, and allow first responders to damage or disrupt drones that get in the way of their work.

An IT security drill went off the tracks in Belgium after a regional government office mocked up emails purporting to come from European high-speed train operator Thalys -- without warning it. A mock phishing email to about 20,000 government employees caused many of them to call the rail operator to complain about the contents. Now the over-zealous security tester knows how the U.S. Army feels -- one of its attempts to see how easily its users could be fooled went awry last year.

Google is rolling out a new "Your Timeline" feature for Maps over the coming weeks that is certain to thrill some folks--and horrify others, PC World reports. You can use the feature to view your entire location history on Google Maps -- at least, that portion of it that was recorded when you were signed into your Google account. If you're not comfortable with all that data being stored, you can also delete a specific day, location, or your full history if you like.

Can't figure out when you need to be in front of what stage to see which band at that music festival? Yes, there's an app. But be cool.

The 19-year old founder of Rex Computing thinks that Intel's chips suck up too much power, and he's got a plan to develop microprocessors that use 5 percent of the energy.