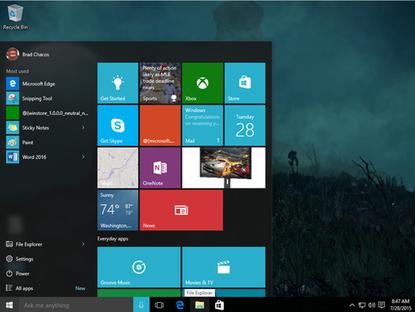 Windows 10 was released to the public on Wednesday, and Microsoft is already encouraging enterprises to begin considering an update.

Jim Alkove, corporate vice president for enterprise and security in Microsoft's Windows and Devices group, said the release provides a number of important new features for enterprise IT departments. In particular, Windows 10 includes management tools that can automatically configure new devices, along with important security improvements that will help protect businesses from attack.

"We've really taken the cyberattack landscape and broken it down component by component," Alkove said.

Windows 10's protections include features like Device Guard, which lets businesses lock devices down to only run applications from trusted developers they choose. The operating system also includes Windows Hello, which lets people log in with biometric information like their fingerprint or face.

The company worked to make the transition to Windows 10 easy for businesses. To start with, Microsoft began meeting with its business customers under the cover of non-disclosure agreements in January 2014, which helped shape Windows 10's eventual release roughly a year and a half later. The transition process should be easier than migrating computers from Windows XP to Windows 7, in part because of lessons Microsoft learned from that transition, Alkove said.

One of the key components of a business's transition to a new operating system is ensuring compatibility with critical applications, some of which are developed in-house. Windows 10 has been built with compatibility in mind and works with a wide variety of programs. Gartner analyst Steve Kleynhans said in a report that barring errors with security tools, "most organizations will find compatibility issues will be minimal and some may see no substantial compatibility issues."

Selling products to enterprise customers is big business for Microsoft -- commercial licensing (including Windows, Windows Server, Office and other products) brought in more than US$41 billion during the company's just-completed fiscal year, which is almost 44 percent of its total sales.

While Microsoft is encouraging enterprises to get a move on when it comes to evaluating the new operating system, analysts think it will take time for businesses to migrate their systems to the new operating system. Kleynhans said in an email that there are a lot of companies that plan to upgrade to Windows 10 within the next 12-18 months. IDC analyst Al Gillen said he expects many small businesses to upgrade within the first year to take advantage of Microsoft's free upgrade offer for Windows 10 Pro, while large organizations will probably wait a year or more to roll out the operating system.

A Spiceworks survey of 500 IT professionals showed that 40 percent of those surveyed plan to upgrade their company to Windows 10 within the first year of its release, and nearly 75 percent plan to do so within 1-2 years after the operating system comes out. Of course, it remains to be seen whether companies will actually start moving in that amount of time, though there is some pressure on them to start moving with Microsoft ending support for Windows 7 in January 2020.

What's more, Windows 10's features may get businesses to upgrade sooner rather than later. George Bedar, LA Fitness's chief information officer, said in an email that the company never planned to upgrade to Windows 8 or 8.1, and this new release seems like it will be more appealing to the company's existing Windows 7 user base.

"We believe it is a great improvement over Windows 8.1 because it provides you some of the good features of 8.1 and still has the familiarity of Windows 7," he said.

LA Fitness doesn't have a specific rollout scheduled, but Bedar said he expects to deploy the OS across the business and begin a full deployment in about a year.

There are some organizations that are moving Windows 10 out to users as soon as possible. Marist College in New York plans to roll out the new operating system to around 500 faculty and staff desktops during its fall semester, with its fleet of more than 850 classroom and lab computers receiving the update by the summer of 2016. Dave Hughes, the school's client technologies manager, said Marist has aggressively adopted new versions of Windows in the past and the college considers it important to stay up to date.

"It's important to stay on top of technology, as our students will inevitably be bringing in the latest and greatest version of Windows," he said in an email. "They are our customers, and we need to be able to support them."

In the meantime, it's clear that businesses are at least evaluating the new operating system for potential deployment. Alkove said 30 percent of the 5 million people testing pre-release builds of Windows 10 through the Windows Insider Program are IT professionals. Sixty percent of the professionals surveyed by Spiceworks said they have already tested a preview version of Windows 10.

Moving forward, Alkove encouraged IT pros to join the Enterprise Insider Program to get a preview of enterprise features that will come to Windows 10 in the future. Starting Aug. 1, enterprise Software Assurance customers with active volume licensing agreements with Microsoft will be able to download the Enterprise and Education editions of Windows 10 from the Volume Licensing Service Center. With those downloads, they'll be able to upgrade devices and set up new ones.

There are new features on the roadmap for the OS that businesses will find valuable, too, like the Windows Store for Business, which lets companies set up an app store with a subset of applications their users can install.

The push to round up enterprises is also part of Microsoft's plan to have 1 billion devices running Windows 10 within three years. Gillen said IDC expects Microsoft to reach that figure in well under three years, barring significant problems with the OS.