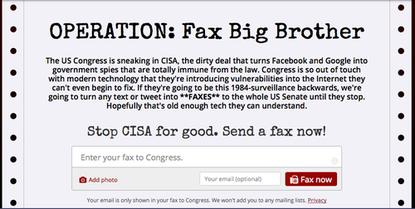 Opponents of a U.S. Senate bill intended to encourage businesses to share information about cyberthreats may have stalled a vote on the legislation.

Recent news reports had Senate Majority Leader Mitch McConnell pushing for a vote on the Cybersecurity Information Sharing Act (CISA) before a four-week summer recess starting Aug. 10, but a spokesman for the Kentucky Republican said Thursday there were no immediate plans for a vote.

CISA is "one of the bills we want to get done," however, the spokesman said by email.

Supporters of the bill, including several tech trade groups, say CISA would help businesses better respond to cyberattacks by giving them more information about hacker activity.

The Information Technology Industry Council [ITI], a tech trade group, called on the Senate to bring CISA up for a vote, but suggested the bill could be further refined.

"We firmly believe that passing legislation to help increase voluntary cybersecurity threat information sharing ... is an important step Congress can take to enable all stakeholders to address threats, stem losses, and shield their systems, partners and customers," ITI President and CEO Dean Garfield wrote in a July 23 letter to Senate leaders.

Opponents of CISA also hosted a Q&A on Reddit on Wednesday, with the discussion generating more than 900 comments and an estimated 2 million page views.

The bill includes minimal requirements for businesses to strip out personal information before sharing cyberthreat information with the government, opponents said. Assertions by the bill's supporters that CISA isn't a surveillance bill are "highly misleading," said Jonathan Mayer, a security researcher and lawyer at Stanford University.

CISA "funnels information to the government, private personal data from businesses to the intelligence community," Mayer said during a press briefing Thursday. In addition, the NSA, using its existing surveillance authority, can use the data to target the people whose information is shared, he said.

Republican leaders in the Senate may attempt to bring CISA to a vote in September, but a delay until then is a victory for opponents, added Senator Ron Wyden, an Oregon Democrat and opponent of the bill. Senators are likely to get an earful from constituents opposed to the bill during the August break, he said during the press briefing.

Lawmakers are under "a lot of pressure to have some kind of response" to cyberattacks after a massive breach at U.S. Office of Personnel Management (OPM) announced in June, Wyden said.

"There is no question in my mind that the federal government needs to step up its game to protect its systems," Wyden said. "This legislation is the wrong approach."