Microsoft has delivered the first large-sized update for Windows 10, a "servicing update" that weighed in at around 325MB. 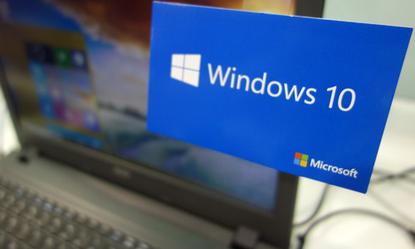 Microsoft has delivered the first large-sized update for Windows 10, a "servicing update" that weighed in at around a third of a gigabyte.

The update, labeled KB3081424 in Microsoft's identifying scheme, has been pushed not only to Windows Insiders -- those who opted in to the firm's preview program -- but also to everyone who has upgraded to the new OS since its launch last week.

KB3081424 was billed as a non-security update: In other words, it did not include patches for vulnerabilities. "This update includes ... changes to enhance the functionality of Windows 10 through new features and improvements," the supporting support document read, using Microsoft's boilerplate for its bug-fix and feature-change updates.

The update was the largest post-launch by far. According to its manifest, the 64-bit version ran approximately 325MB, while the 32-bit version tipped the virtual scale at around 160MB.

Because the update was a cumulative roll-up, meaning it contained repeats of individual fixes or smaller collections issued previously, not everyone will have to download the full package. "If you have installed previous updates, only the new fixes that are contained in this package will be downloaded and installed to your computer," Microsoft said.

Other than that terse commentary and a long list of files to be overwritten or added by the update, the document included no other information about the update's contents. That's become standard practice at Redmond, which has made updates a series of increasingly-mysterious black boxes.

Some have started to complain.

Someone identified - seriously - as "QuackyQuacky1" -- chimed in as well. "Will you be bringing back the size being displayed in Windows Update for updates?" the user asked Aul. "It is infuriating that it doesn't show the size!"

Although Microsoft prefers to deliver updates after hours or when the device is not hard at work on productive chores, those eager to get the latest can manually trigger an update check. Without an idea of an update's size, however, they risk tying up their bandwidth for an extended stretch.

Today's update will be the first real test of Microsoft's alternate delivery mechanism, "Windows Update Delivery Optimization" (WUDO), which uses a BitTorrent-style peer-to-peer technology, commandeering customers' upload bandwidth to deliver updates and apps to other devices on the same local network, or to strangers simply connected to the public Internet.

If a user has set Windows 10 to file share only with "PCs on my local network," the 325MB update, once downloaded to one system on that network, will theoretically be handed over to other PCs on the network, eliminating duplicate downloads. If someone has four Windows 10 devices on their home Wi-Fi network, for instance, WUDO should reduce the over-the-Internet download by 75%, from 1.3GB to 325MB.