That ad blocker you love? It's costing publishers a pretty penny 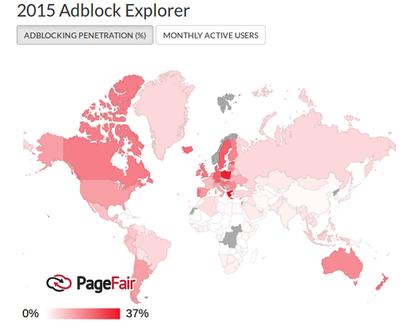 Ads have long been part of the trade-off for users of the free Web, but the rise of ad blockers is making it increasingly difficult for publishers to sustain that ad-supported model.

That's according to a report published Monday by Adobe Systems and PageFair, a startup focused on assessing the cost of ad blocking and proposing alternatives.

While PageFair clearly has a vested interest in illustrating the negative effects of ad blocking, the findings of its study with Adobe are difficult to ignore. Most notably, ad blocking will cost publishers nearly US$22 billion this year, it reported.

Ad blocking has grown by 41 percent globally in the last 12 months, the report found, amounting now to about 198 million active ad-block users around the world.

Meanwhile, those numbers will surely be on the rise on the mobile side, Adobe noted in a blog post, given that Apple's iOS 9 will likely include ad-blocking features in Safari by default while Adblock Plus is already available in limited beta for Android.

In many ways, the ad-blocking phenomenon is a response to security and privacy fears that have arisen in the culture at large and a rejection of the state of advertising on the PC internet, Sterling said.

"Many websites have become like Las Vegas casinos, with all kinds of flashing and garish ad units and lots of visual noise on the page," he noted.

Many consumers are sympathetic of the role ads play in supporting online content, but "the industry needs to take this as a wake-up call and do a better job with disclosures about data usage and offer overall better ad quality and ad creative," he said.

Some formats, such as search ads and native ads, are generally not subject to ad blocking, Sterling pointed out, "so we may see a migration to more of these types of formats in tandem with other efforts," he predicted.