Most allegations against Julian Assange are dropped, but rape investigation remains 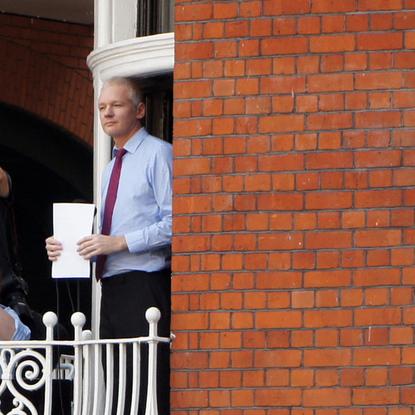 Julian Assange speaking from the balcony at the Ecuadorian Embassy in London.

The Swedish Prosecution Authority has dropped the investigation of WikiLeaks front-man Julian Assange for sexual molestation and two unlawful coercion allegations, but it still has a rape allegation to investigate.

The charges were dropped because the statute of limitations will run out on in the next week, Marianne Ny, director of public prosecution said in a statement. Assange can be prosecuted for the rape allegation until August 2020.

This long running saga took a new turn when the Prosecution Authority in March finally agreed to interview Assange at the Ecuadorian embassy in London, where Assange has been holed up since June 2012. Assange has consented to doing the interview, and the U.K. has granted the request for legal assistance. However, Ny has still not received a permission from Ecuador, according to the statement.

Assange, who has always denied the charges directed at him, took refuge in the Ecuadorian embassy to prevent extradition to Sweden. He feared he could eventually be extradited from there to the U.S. to face charges for publishing thousands of secret U.S. diplomatic cables on the WikiLeaks website.

In Sweden, every extradition case has to be judged on its own merits. For that reason, the local government can't provide a guarantee in advance that Assange wouldn't be subject to further extradition, the Swedish Prosecution Authority has said on its website.

However, once the British authorities enforce the U.K. Supreme Court's decision to extradite Assange to Sweden, the country is bound by the so-called "doctrine of speciality," which means that it can't extradite him further to a third country without permission from the U.K., the authority added.