The company's two new smartphones will start shipping this month 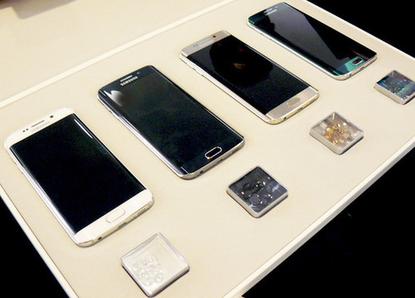 Galaxy S6 edge phones in an array of vivid colors. The Note5 is only available in two color options.

With glass, metal and a number of hardware improvements, Samsung Electronics is hoping to entice consumers to spend big on its latest smartphones with large screens, the Galaxy Note 5 and Galaxy S6 edge+.

When Samsung launched the first Galaxy Note, few believed the concept would work, but the company correctly predicted the appetite for large screens. Now, though, it faces an arguably bigger challenge: convincing consumers to pay top dollar for the Note 5 and S6 edge+ as competitors have given up on charging as much for their top models as Apple does.

However, Samsung has given itself the ingredients for success with the Note 5 and S6 edge+, which the company launched at event in New York on Thursday.

"The demand for larger screens is bigger than ever," Samsung President and CEO J.K. Shin said at the New York event. "Bigger screens are great for moving between images and important files."

Samsung is "betting big" on smartphone owners using the devices as multimedia consumers and multitaskers, Shin added. The two new devices target those users, he said.

"If you want the best camera for sharing photos and videos on social media, we have the smartphone for you," Shin added. "And if you want help managing your life ... we have the Galaxy Note."

Samsung has taken the designs it premiered on the Galaxy S6 and S6 edge earlier this year and enlarged them. The Note 5 and S6 edge+ also have a glass back and a metal frame, which give them a classier look than previous Galaxy Note products.

However, this new level of luxury once again comes with a few drawbacks: Neither of the models are water resistant, have a user-replaceable battery or microSD card slot.

The battery capacity is 3,000mAh, slightly smaller than the Galaxy Note 4's 3,220mAh. Samsung partially makes up for that with quick charging and a power efficient processor. The devices also have wireless charging capabilities.

The decision to exclude expandable storage makes the new models stand out from a majority of their Android-based competition. Vendors such as Sony, LG, HTC, Motorola Mobility, Huawei Technologies and Asus have all included microSD card slots in their latest models. OnePlus and Xiaomi are siding with Samsung's view that expandable storage is no longer needed.

The rest of the Note 5 and S6 edge+ specifications are free of disappointments. They include the same Samsung-designed octa-core processor used in the existing S6, with 32GB or 64GB of integrated storage and, for the first time, 4GB of RAM. Add to that a 16-megapixel camera on the back and a 5-megapixel camera on the front. A fingerprint sensor is also included.

The screen size on both models has remained unchanged from the Note 3 and Note 4 at about 5.7 inches, and the resolution has stayed at 1440 by 2560 pixels. The quad high definition resolution is starting to make sense on the larger screens, and is one of main strengths of the Note 5 and S6 edge+.

After a slow start with last year's launch of the Galaxy Note Edge, Samsung's bet on a screen with curved edges caught on with the S6 edge. Unfortunately, Samsung underestimated demand for that model, and only had a limited supply available, according to analysts.

The company is now hoping to build on that momentum with the S6 edge+. The curved screen helps it stand out from other smartphones, but Samsung is still struggling to come up with effective ways of using that feature. The S6 edge+ has an "apps edge" for easy access to favorite apps, and an enhanced "people edge" for easy communications with preferred contacts, the company said.

For users that want Samsung's S Pen, the Note 5 is the model to buy. With every generation, Samsung has improved the accuracy of the pen to make it more useful. The Galaxy Note 5 has an all new S Pen that feels more solid and balanced in the user's hand, according to Samsung.

Both the Note 5 and S6 edge+ will be available in stores in the U.S. and Canada on August 21 and globally later this month.

Pricing wasn't immediately available, but both newcomers are expected to come with big price tags. As a frame of reference, the Note Edge with 32GB of storage costs US$840 without a contract from U.S. mobile operator Sprint's website.