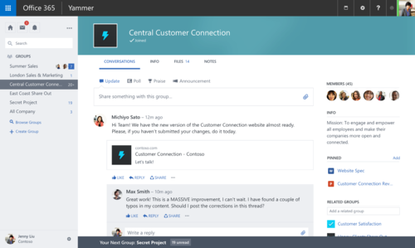 Microsoft announced a smorgasbord of improvements to its Yammer enterprise social network today focused on helping people connect more easily with their teams.

By default, people who access Yammer via their web browser will be taken to a new "Discovery" feed on the service's home page that is supposed to better show them relevant content from their groups along with other public teams across their company's network. It's supposed to help keep people in closer touch with important discussions they may be missing on Yammer.

After users finish reviewing new content in one group, Yammer will display a pop up banner with a link to the next group they're subscribed to that has new content. Yammer's mobile apps will get similar functionality through a new Group Updates feed that lets users see a list of different conversations in various groups all on one screen. That way, they won't have to look through individual groups to get the same information. That feature will begin rolling out on Android first before making it to Yammer's iOS app.

In addition, Yammer is also tweaking the design of individual groups' pages. Now, each group will have a full-width banner at the top of its page, and discussions within the group can now take up a wider space on the page to aid in lengthier discussions. The whole page has also been redesigned to focus users' attention on important content.

Icons in the left-hand sidebar will show the users that are active in groups they are a part of, so they can stay up-to-date on where conversations are happening in real time. It's a move that could make Yammer more competitive with popular chat solutions like Slack, which has been growing incredibly rapidly and was recently valued at $2.8 billion.

Yammer's mobile app also gained support for attaching files from external storage services like OneDrive and Dropbox, inviting coworkers to a user's network by email and mentioning people in comments.

There's even more up Yammer's sleeve on top of all these updates. The social network's iPhone app will soon have a companion version for the Apple Watch that will let people interact with content from their coworkers.

The updates come at a time when Microsoft is putting more effort into improving its workplace collaboration tools. The forthcoming Office 2016 update will add support for real-time collaboration on shared files, while Microsoft's newly-released Power BI tool helps people who aren't data analysts tap into detailed information about their company's business and share that with their coworkers.