It's for Android devices and available currently in four languages: Bengali, Brazilian Portuguese, English and Indonesian 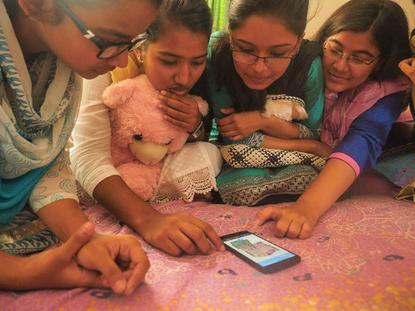 The Mozilla Foundation wants to make sure that the Web remains a platform where anyone can create content, rather than just a place to consume information and services created by others.

The non-profit organization has released an easy-to-use app for Android devices, called Webmaker, that allows users to create Web pages and simple apps from their smartphones, which are quickly becoming the predominant technology used to use the Internet, especially in less wealthy countries.

"We want the next two billion people coming online to understand that the Web is theirs to read, write, and participate in," said David Ascher, Mozilla's vice president of products.

Currently, about 40 percent of the world's population enjoys Internet access, or a little over 3 billion people. Webmaker was designed to give these users a way to create their own presence online. Webmaker also could set the stage for bringing more local content on the Web, Ascher said.

While social networking sites such as Tumblr and Instagram, offer the ability to create content from mobile devices, Webmaker was designed to provide more flexibility in terms of how the user can present information, by not locking them into a single format for presenting information.

The foundation says it designed the software to be as easy to use as possible.

After signing in, users are provided with a blank page and the ability to add either text, images or photos. Additional pages can be then be added. A user is given a map to stitch together pages in a way that best fits their needs.

When the app is finished, it is stored on the Webmaker.org site, where it can be accessed from either a phone or a computer browser.

With Webmaker, users could create a blog, a mapped guided tour, a scrapbook, a recipe page, birthday cards, or any number of other Web facing apps. The apps can be accessed through any Web browser, so they don't need to be downloaded on the user's device.

In addition to building pages from scratch, users can also expand on other people's apps, which are all publically available. The software has been available since June as a beta release, and has already built up a repository of user apps that others can borrow from.

Mozilla plans to add more capabilities in future releases, based on user feedback. Many have been calling for video, or a way to run animated GIFs, for instance.

Webmaker can run on smartphones with Android 4.0 or newer. Initially, Webmaker is available in four languages, Bengali, Brazilian Portuguese, English and Indonesian. Additional languages will be supported in future releases.