The SSDs can withstand up to 1.2 petabytes of writes 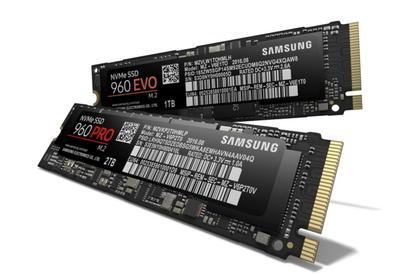 Samsung today released two of its highest-capacity SSDs for consumers. The drives are based on the M.2 "gumstick" form factor, which is quickly being adopted in the latest ultra-thin notebooks and PCs.

Both SSD models are equipped with Samsung's TurboWrite technology, which the company first unveiled in 2013 in its 840 EVO internal 2.5-in SSD. TurboWrite creates a high-performance write buffer to which new data is first written to high performance single-level cell (SLC) NAND flash and later moved to multi-level cell (MLC) flash.

Samsung began using the NVMe specification last year with the introduction of its 950 Pro SSD.

NVMe is a a logical device interface specification for accessing non-volatile storage, such as NAND flash, via the high-speed PCIe bus. The PCIe bus allows non-volatile storage to be directly connected to a computer's motherboard versus more traditional interfaces, such as serial ATA (SATA), which require a data translation layer and creates additional I/O latency.

On the 960 Pro and 960 EVO SSDs, Samsung is also introducing the fully rebuilt Magician software with a new user interface, with which users can control various SSD settings including firmware updates.

In May, Samsung announced it had begun mass-producing the world's smallest 512GB PCIe-connected SSD that also used the NVMe specification.

The 960 PRO and 960 EVO SSDs are also based on Samsung's 48-layer V-NAND-based NAND flash, which stacks cells one atop another like a microscopic skyscraper for greater density and performance.

"We were proud to erect the NVMe era last year with the introduction of our 950 Pro SSD," Un-Soo Kim, senior vice president of Samsung's memory business, said in a statement. "Now, with the introduction of the NVMe 960 PRO and 960 EVO SSDs, Samsung is once again taking the next step in the multi-terabyte SSD technology and the storage revolution, providing users higher capacities and speeds than ever before within an NVMe PCIe drive to create new possibilities for consumers and business professionals."