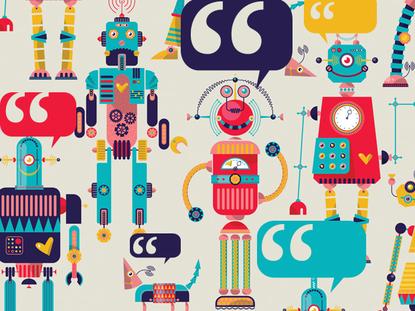 Starting from behind the likes of Slack and HipChat with its new workplace collaboration Teams service, Microsoft can use all the help it can get. Startup Message.io is among those coming to its aid.

Message.io, a bot translation tool and syndication service provider founded last year, enables developers to quickly port and scale their bots to work on numerous enterprise messaging platforms without making coding changes. It is partnering with Microsoft so that bots built for other messaging platforms will work on Teams within Office 365 (not to mention on Microsoft's Skype for Business).

MORE: An epic search for the IBM Verse e-mail system

We're talking about presumably useful bots, the kind that software companies like HubSpot are going ga-ga over for automating customer service, etc.-- not the sort of botnets that terrorize DNS networks.

Message.io claims that developers of more than 100 bots -- including HubSpot, Kayak and Poncho -- have committed to using its technology to translate their bots to Teams. If you're interested in getting in on the beta test, you can request an invite here.

The embrace by enterprises of workspace collaboration systems has been fueled by "a realization that conversational interfaces, including both messaging and voice, are going to change the way we all interact with the world around us," says Message.io CEO and Co-founder Tom Hadfield, now on his 5th startup with Message.io CTO James Cundle. "You're increasingly seeing the messaging interface becoming the primary way to engage with enterprise software tools...we think of messaging as the new operating system for the enterprise."

This applies to everyone from customer service reps to human resources staff to internal application developers, says Hadfield, who adds that friends of his run companies entirely on Slack or Teams, and only use apps that work with those messaging platforms. Bots, of course, are becoming an increasingly popular form of such apps.

An earlier Hadfield startup called Fetch, an e-commerce company that employed text messaging to simplify the buying process, sparked the idea for Message.io by illustrating the potential of conversational interfaces to make doing all sorts of things easier.

One fortunate thing for Message.io, as a company translating between different messaging platforms, is that the primary enterprise systems do have a lot in common in terms of API methods and UI elements that they support. "There's a lot of uniformity when you compare it, for example, to mobile app development... iOS and Android are orders of magnitude different," Hadfield says.

Message.io's service is free during the beta period and the company plans to offer premium services, such as analytics, payment and identity, down the road.

In addition to scoring a partnership with Microsoft, Message.io announced $2.5 million in seed funding, led by Khosla Ventures and ENIAC, and featuring a cast of many others. Hadfield says he's seen most venture funding for bot-related ventures going to those with an enterprise focus, and in particular to the "picks and shovels companies, the bot building tools and frameworks." And Austin, where Message.io is based, is the  "the chatbot capital of the world," based on the number of venture-backed chatbot companies in the area, Hadfield quips.

Message.io, which currently has a staff of 12, intends to use its new funds to add support for enterprise messaging platforms such as Salesforce Chatter and Cisco Spark.