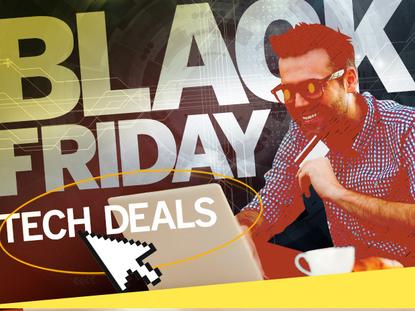 Some have begun referring to this month as Black November since pre-Black Friday, Black Friday and Cyber Monday sales have all blended together. Not all the supposed deals are actually deals at all – in many cases, the retailers are just trying to offload stuff – but there are plenty of bargains to be had on the hottest smartphones, tablets, PCs and gaming systems. Here’s a look at some of the best deals.

This model of the Apple MacBook Air is powered with an Intel i5 processor, has 8GB of RAM and 128GB of flash storage. Best Buy is cutting $200 off the regular price to sell it for $800.

Lop $220 off the price of this bundle to come in at $500 for the package. The machine boasts 1TB of storage, 8GB of memory and an Intel Core i7 processor.

Dell is marking down this flexible laptop/tablet from $350 to $200 online for Black Friday. The machine, which weighs in at just over 3 pounds, boasts Windows 10 Home, 4GB of RAM and a 500GB hard drive.

This compact desktop will run you just $100 (!), half off of Dell’s usual price (though we’ve seen it listed for as much as $350 too). The machine runs Windows 10 Home, has 4GB of memory and a 1TB hard drive. It’s powered by a 6th generation Intel Core i36100 processor.

This system boasts an Intel i7 CPU, 8GB of RAM, 1TB of storage and comes in at $450, or $400 off the usual price. Note that other HP systems from Office Depot/Office Max can also be had for $270 and $330 with less powerful processors.

You’ll be able to get this Celeron dual-core processor-powered laptop with 16GB of storage (expandable to 2TB!?)

This 15-inch touch-optional Windows 10 laptop is powered by an Intel i7 processor, has 6GB of RAM and 1TB of storage. Regularly priced at $830, HP is selling it for $600 starting on Thanksgiving Day.

This 12-inch touch display tablet/laptop combo usually starts at more than $2,000, but the price has been slashed nearly in half for HP’s Black Friday sale. The system runs Windows 10 Pro 64 and boasts a 6th generation Intel Core m processor and Intel HD Graphics 515 processor. It has 4GB of memory and 180GB of storage.

You can get this Windows tablet with a 12.3-inch screen, signature type cover and Intel Core m3 processor for $600 ($400 off). Note that the pen is sold separately.

Walmart is making the price on this pretty mini, by cutting $70 off the usual $270 price for this 32GB model.

4pm Thanksgiving Day. Among the deals, this 7-inch Android tablet for $70, which is $60 off the regular price. It comes with 8GB of storage and can be expanded via a 32GB microSD card.

Perhaps not the first name the comes to mind for tablets, but yes, Polaroid makes this 10-inch system featuring Android 6.0 and comes with a Bluetooth keyboard in this bundle for $60 ($140 off the regular price). Boasts 8GB of storage and 1GB of RAM. Loving the promo language on the Shopko website about “Keep yourself nice and occupied by purchasing this…”

This Android device with 8GB of storage regularly goes for $150, but Kmart is selling it for $100 and including $50 of Shop Your Way Reward points to use at a later time.

Staples, which opens its doors on Black Friday at 6am but is closed on Thanksgiving, is axing the price of this tablet from $130 to $80.

This high-end tablet is going for $800 at Staples on Black Friday, down from the usual price of $1,000. This Intel Core i5 processor-powered tablet has a 12.3-inch display and runs Windows 10. It includes 4GB of RAM and 128GB of storage. Keep in mind that while this tablet comes with a Surface Pen, it doesn’t include a detachable keyboard – that’ll run you another $100 or so.

The Fire HD 8-inch tablet will cost $60 ($30 off) on Nov. 24-25, and Amazon is promising that its Alexa cloud-based voice service is on the way. Starts at 16GB of storage though is expandable to 200GB via a microSD slot.

Best Buy will sweeten the purchase of a new Android phone, which costs about $28 per month for 24 months under an installment plan, by tossing in a $250 store gift card PLUS A Samsung Gear VR viewer.

Verizon is offering phones such as the Samsung Galaxy S7, Pixel Phone from Google and Moto Z Droid for $10/month for 24 months, 0% APR, which is a savings of up to $400 on these devices.

Perhaps not household names, but might one of these make it into your household for $225?

Sears has plenty of TVs on its sales list this holiday season, and among them is this 1080p HDTV set marked down from $400 to $250.

This is a lot of LED TV for $750 for members of the wholesale club.

This could be a big seller during the holidays, and Sears is cutting the price from $180 to $140. Too lazy to look up the weather on your phone or look outside? Want a more mobile music system for the house? Echo could be for you (though let’s see how Amazon prices it too this holiday season).

The store is offering 50% off the usual 3-month Microsoft Xbox Gold Membership card, listed at $25.

Hours of amusement, we’re sure. And 25% off at $30 for the Star Wars fan who has everything.

Nintendo announced two special-edition models, one white and one black featuring Mushroom Kingdom characters/imagery, for $100, at least $50 off what the 3DS usually goes for. Gaming system provides 3D-like effects without the dorky glasses.

This pharmacy isn’t exactly a treasure trove for high tech items, but if you happen to be at one, these $6 Philips Earbuds ($10 off, plus you get $6 in Plenti Points for their reward system) with soft rubberized caps make for a nice stocking stuffer.

Harbor Freight is knocking $80 off this this 4-channel security system and 2 cameras, which will sell for $200 as a Black Friday deal. Keep track of entrances and exits using a 7-inch monitor screen, which displays video from up to 4 cameras and records video using an optional 32GB SD card.

This glow-in-the-dark hovering machine, which is 2.4GHz WiFi-enabled and can record video to your smartphone/tablet, is being marked down by 40% to $70. The drone can be used indoors/outdoors, and weighs in at 3 pounds. For True Value, “Black Friday” extends from Nov. 16-29.

Apple and Kohl’s have buddied up so that the retailer better known for its clothing sales will be adding Apple Watches to the accessories it sells. The Series 1 & 2 watches will sell for $269 and $369, respectively, which is no bargain, but Kohl’s sweetens the deal for holiday shoppers by including $105 in Kohl’s cash for Series 2 buyers and $75 in Kohl’s cash for Series 1 buyers.

Okay, this isn’t exactly an Oculus Rift or HTC Vive setup, but if you aren’t ready to pull the trigger on one of those advanced virtual reality systems, you could get a taste of VR for $10 with this deal (half price). The promo on the JCPenney website says “ready for most phones,” but that would seem to be limited to Android ones.

Even the arts/crafts supply retailer is getting the VR bug, offering this viewer, which it claims works with most smartphones. The gadget usually sells for $50, but comes in at $20 for Black Friday shoppers, and even less if you grab one of the 25% to 50% coupons Michael’s is making available over the Thanksgiving holiday shopping weekend.

The Amazon Echo voice-controlled device (via its Alexa technology) will be available for $140, which is $40 off the usual price.

This package will go for $250 ($50 off), plus exclusive blue console and controllers available (Microsoft has actually branched out beyond black and white systems with a variety of limited edition colors). GameStop isn’t open on Thanksgiving Day, but its deals are expected to be available at least by then online.

The easy-to-use streaming media player (2nd generation) is being offered for $25, which is $10. Stocking stuffer?

These high-end, comfortable headphones are being reduced in price from $300 to $120. Doctor Dre-approved.