Mesosphere, Kubernetes and Docker Swarm are all gaining tractions as more enterprises use containers 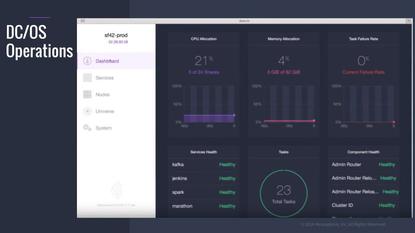 The news marks a validation of Mesosphere’s technology given HPE is seeing demand for the product from its enterprise customers, analysts say. It also reinforces the notion that more and more organizations are embracing the use of containers – a technology used to package modern applications and run them in data centers or public clouds.

The expanded partnership between HPE and Mesosphere comes about a year after the San Francisco-based startup received more than $70 million in a Series C financing round, led by HPE and Microsoft. Mesosphere “brings a lot of compelling things to the table,” says Marc Semadeni, ISV Product Manager at HPE. Namely, he says Mesosphere’s DC/OS is able to manage how both legacy applications and new container and cloud-native ones are deployed across a variety of infrastructure, whether it’s an on-premises data center or a public cloud.

“There are a lot of customers who want to get out of a siloed, extreme scale-out infrastructure approach and move into a more flexible architecture,” Semadeni says, adding that there are security, compliance and data gravity reasons why existing applications and infrastructure will remain. The agreement to resell Mesosphere’s DC/OS is not exclusive though, and Semadeni notes HPE helps customers deploy other container management platforms such as Kubernetes, and Docker-based products like Swarm too.

Mesosphere has co-selling agreements with other partners too, but “we don't have any relationship quite like what we have just announced with HPE,” says Edward Hsu, vice president of product marketing at Mesosphere.

The idea behind Mesosphere is to in a sense virtualize infrastructure at a high level, such as whole data centers or public clouds. DC/OS software sits atop those infrastructure environments and automatically deploys applications onto the infrastructure as needed. DC/OS is based off of the open source Apache Mesos project. Read more about Mesosphere’s strategy here.

Jay Lyman, an analyst with 451 Research, says HPE reselling DC/OS is significant because it validates Mesosphere’s technology as a legitimate option for application container management and orchestration. He says the Google-originated Kubernetes is generally considered the dominant platform in this market, but has not yet become a de facto industry standard.

“Our research tells us that hybrid cloud computing continues to grow,” Lyman explains. “And there are many variants of hybrid cloud. It’s typically thought of as combining public and private clouds, but some organizations are combining multiple public cloud platforms. Containers give users the portability of applications across these environments.” And when containers are used at scale, then management platforms like Mesosphere, Kubernetes or Docker Swarm can be helpful.

It’s still early days though. A study by UBM late last year found that only 7% of more than 300 technology professionals at large organizations were using containers in production. Another 27% were using them in test and development environments, and 8% chose the “what are containers” response to the question. Lyman pointed to 451 research of a more targeted audience, which found that up to one-third of respondents were broadly using containers.

“We see container usage increasing pretty quickly,” Lyman says. “Once you start managing container clusters, instead of just containers in virtual machines, then you start dealing with more complexity.” Container management platforms help organizations oversee the compute, network and storage needs associated with deploying containers at scale. Most mainstream enterprises IT shops are not yet at the point of needing a container management platform, Lyman says, but the platforms are being used in test and development scenarios and they should be “on the radar” of IT shops.