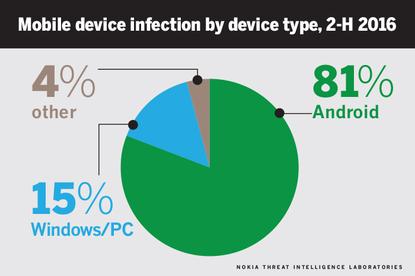 Smartphones are by far the most popular target of mobile malware, and the infection rate is soaring, according to new research by Nokia.

During the second half of 2016, the increase in smartphone infections was 83% following on the heels of a 96% increase during the first half of the year, according to Nokia’s latest Mobile Threat Intelligence Report gathered from devices on which Nokia NetGuard Endpoint Security is deployed in Europe, North America, Asia Pacific and the Middle East.

In the second half of last year, of all the infections in mobile networks, 85% were against smartphones, which is an increase of 83% from the first half. Among these smartphones, Android devices are most often the target (81% of the time). iPhones fall victim less than 4% of the time.

These increases are fueled by a steep increase in the variety of mobile malware, particularly directed against Android devices. In January 2016 Nokia had less than 600,000 Android mobile malware samples in its database, but by the end of the year that had grown to just under 12 million.

Perhaps surprisingly, 15% of infections were registered against Windows PCs attached to mobile networks via wireless dongles or tethered to cell phones acting as wireless access points. While that’s the second most frequent target, the percentage of infections of these devices compared to smartphones has been on the decline since the middle of 2015. Then, Windows devices accounted for 80% of infections.

While the surge in attacks against mobile phones was most significant, the rate of increase against all forms of wireless devices including phones was less steep, up 25% in the last half of the year. The average infection rate over those six months was 1.08% of all devices, hitting a peak monthly rate of 1.35% in October.