Bank says that it is bringing big data to small businesses 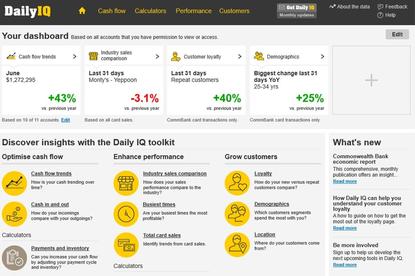 The Commonwealth Bank has launched a new analytics platform — Daily IQ 2.0 — for its small and medium business customers.

The bank today announced that it would make the platform available for free through its online NetBank and CommBiz services.

The new platform draws on data including the CBA’s 1.2 billion monthly transaction records, industry data, and a customer’s account and point-of-sale information, the bank said. The platform can offer details about the suburbs where most customers live, for example, based on card-based transactions.


The service’s predecessor — an app called Daily IQ — had a limited release in 2014. One key difference with the new platform is a comparison feature that allows SMBs to benchmark themselves against similar businesses in the same industry.

The bank said that initially its small and medium business customers would be able to access the new tool, with CBA aiming to roll it out to smaller businesses later this year.

“Through Daily IQ 2.0, our goal is to empower SMEs to take advantage of the scale of CommBank’s transaction information combined with important data feeds and scenario modelling to create a clearer daily picture of the opportunities and risks that exist within their business,” Claire Roberts, Commonwealth Bank executive general manager business banking SME, said in a statement.

“SMEs are constantly being told about the benefits of big data, but the reality is that many don’t know where to start or have the time and expertise to produce insights that actually impact their day-to-day decision-making.”
IDG
Copyright 2022 IDG Communications. ABN 14 001 592 650. All rights reserved.
Reproduction in whole or in part in any form or medium without express written permission of IDG Communications is prohibited.
IDG Sites: PC World | Computerworld Australia | CIO Australia | CSO Online | ARN | CIO Executive Council