How NASA's A.I. moonshots idea could help your enterprise 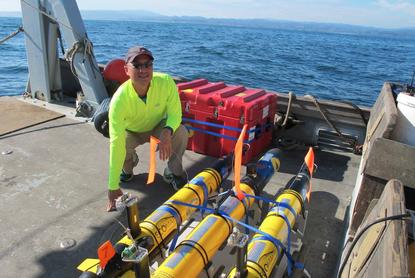 Every few weeks, a group at NASA's Jet Propulsion Laboratory in Pasadena, Calif., finds an empty conference room where the participants sit down to talk about how they can use artificial intelligence to make what might seem like crazy ideas a reality.

This is the JPL's informal A.I. moonshots group.

The group isn't talking about the moon, but is taking ideas that might seem like science fiction and figuring out how to use artificial intelligence to make them work.

These A.I. experts are focused on efforts such as sending small submarines to search for life beneath the oceans of one of Jupiter's moons and flying an autonomous spacecraft on a 100-year trip to another star system.

This same idea of a group focused on A.I. moonshots could also put big ideas into play for the enterprise.

"We ask ourselves what can have a huge impact on humanity, that this might be considered the big legacy of A.I.," said Steve Chien, head of the A.I. group at the JPL. "And I would say that any organization that wants to exist in the long term, that wants to aim big, that is forward-looking, could benefit from this kind of group. I think some of the employees at a large company need to be coming up with crazy ideas, doing strategic thinking and outlining a vision."

Chien, is a senior research scientist and technical group supervisor at the JPL's A.I. group, where he has worked for 27 years. Six months ago, he pulled out a core group of six to eight regulars of the JPL's artificial intelligence team. They brainstorm ideas over lunch and often are given homework problems, like how to best set up an antenna on an asteroid.

The A.I. moonshot group's goal is to come up with far-reaching, envelope-pushing goals that many would dismiss for being too fantastical. They look at how A.I. can be used to support space exploration and enable spacecraft to travel farther from Earth. They also think about ways to perform more tasks with little or no human control.

"A.I. is increasingly important with every mission because the technology is becoming more accepted and more and more capable," Chien told Computerworld. "I wouldn't say all or even most missions will use A.I., but there are missions where A.I. is a natural fit."

Some of the ideas the moonshots group is working on include advanced smarts for the 2020 Mars rover that will enable the rover to drive farther and faster on its own. The  group is also looking for ways that spacecraft could travel through the solar system by catching rides on passing comets.

It also is figuring out a plan to set off 100 spacecraft, each one the size of a microwave oven, to study near-Earth objects. NASA might be able to use A.I. to give these spacecraft a high level of autonomy, which would reduce the number of human operators needed for the project. Human operators might be out of reach since some of the spacecraft would fly as much as 200 million miles.

The moonshots group also is thinking about sending autonomous submarines below miles of ice to investigate the possibility of life near hydrothermal vents in the oceans of Europa, one of Jupiter's moons. The submarines would need to work on their own – with zero contact with Earth –- for months or even a year at a time.

"We're excited by that idea because how cool would it be to find life not on Earth?" Chien said. "We want these to be big at a NASA scale and big on a humanity scale."

The moonshots group might be finding ways to use A.I. in the far reaches of our solar system, but this same type of brainstorming could work much closer to home.

"I think a lot of organizations -- at least some of the biggest most advanced ones -- are looking at how A.I. can help them in all sorts of business processes," said David Schubmehl, an analyst with market research firm IDC. "Now is a good time to experiment."

Schubmehl said it may be a small percentage of large companies at this point, but enterprises are beginning to gather together groups of big thinkers to brainstorm ways to use A.I.

So what do companies need to do to put together their own A.I. moonshot group?

Chien suggested that companies look to people who not only aren't afraid to think outside the box, but who also have diverse backgrounds.

While JPL's moonshot group has A.I. experts at its core, the group also calls in people from different departments and fields, depending on the idea being worked on. Chien said the A.I. group has asked experts from propulsion, radio communications and planetary science units to work with them.

"If somebody proposes an idea with a huge flaw, you're not allowed to kill the idea," Chien said. "You just recognize the flaw. You might find a way around it. You want people to not be scared to say crazy things and to ask something they might think could be a stupid question… We want to promote the generation of ideas without filtering."

And since there are a lot of smart people in the room, the A.I. moonshots group tries to keep any conversation from being dominated by one person. They also try to keep yelling to a minimum, while allowing participants to be spirited about their ideas.

The group also assigns what basically are homework assignments. Since group members also have their regular jobs, they aren't given homework deadlines but they are asked to investigate different aspects of an idea or problem.

"We ask questions like how central is A.I. to this?" Chien said. "Could you do it without A.I.? If we had a cool idea and it wasn't central to NASA's goals, why are we doing it? That's why we're not working on the next social media app."

IDC's Schubmehl recommended that companies think about their data while setting up a group to brainstorm ideas.

"One of the things you should be thinking of is that almost all of these A.I. projects are based on data," he said. "You need someone who knows what data the organization has and what data they potentially can get access to so it can help them develop machine-learning models to provide predictions or recommendations or enhance business processes."

While moonshot groups need big picture thinkers, they also need backing from the company's top executives, including the CIO, CFO and the CEO, Schubmehl said.

"They also need to be prepared for some level of failure," he added. "Not every A.I. application will succeed."

However, Whit Andrews, an analyst with market research firm Gartner, warned that moonshots groups are a good idea for companies that already are working with A.I., but they won't succeed with companies just getting started with the technology.

"Our general advice around A.I. to clients, at this stage in A.I.'s history, is to say to focus on the opposite of moonshot projects," Andrews said. "Look at problems you've had for years or decades that you haven't been able to fix because you don't have enough people or you don't have enough time… Learn your lessons. Create solid relations with service providers or your data scientists and then embark on the moonshots you might have been discussing the whole time.

"It's OK to think about the moonshots, but for God's sake don't start there," Andrews added.

Some IT managers may get excited about the prospect of working with A.I. and jump in head first instead of using a slow and measured approach, he said.

IT groups should start by figuring out the best way to set up a data science project, learning what parts of the company's data they can best work with and what parts of the enterprise are best suited for a A.I.

"That's a great time to start to ask yourself what else could you do," Andrews said. "Is there something that we've never thought of before?"