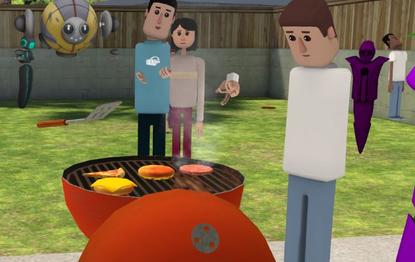 AltspaceVR, a leading social virtual reality platform, and the first to gain a significant user base, has announced it is going out of business.

The company will close down next week due to a funding deal that fell through and” the general slowness of VR market growth” making investors reluctant to commit further funds.

“The company has run into unforeseen financial difficulty and we can’t afford to keep the virtual lights on anymore. This is surprising, disappointing, and frustrating for every one of us who have put our passion and our hopes into AltspaceVR,” the Silicon Valley-based start-up with 40 employees said in a statement.

The platform, which was available for free to anyone with Daydream, Vive, Gear VR, or Oculus Rift virtual reality headsets, had around 35,000 monthly users – a significant portion of the total market.

Occasional events were held in the virtual space, a gig by artist Reggie Watts set the (still standing) record for most people in VR at one time.

The Altspace platform served as a testbed for how social interactions could and should work in the nascent virtual reality domain.

For example journalist and user Taylor Lorenz wrote in a blog post last year that within minutes of entering Altspace she was ‘swarmed by male users rubbing on me’.

Altspace added a new tool ‘space bubble’ which stops other avatars from getting too close.

“Our latest feature helps bring the same social standards we have in real life into our virtual world” the company said at the time.

Learnings such as those are likely to help refine future social VR platforms. Technology developed at the company would also live on, Altspace believes.

“The amazing people that worked at this company created some awesome technology – things that we think will be foundational to the future of social VR. We’d love to see this technology, if not the company, live on in some way, and we’re working on that,” a statement said.

One of Altspace’s selling points was an open SDK so developers more easily build experiences that extended to the platform.

“Most people in AltspaceVR spent their time playing with the things that the SDK community created, with thousands of people each day enjoying apps built on our flavor of the VR web,” the company said.

“As our SDK apps are built on three.js and A-Frame, it would be wonderful to see your apps live on in other browsers.”

There are a number of rival social VR platforms, including VRChat and High Fidelity. Facebook introduced a ‘lite’ version of social VR called Spaces in April, for users with an Oculus Rift headset (Facebook acquired Oculus in 2014).

“We remain steadfastly excited for the promise of social VR and wish our friends in the area much success,” the company said. “There have been many tears and there will probably be a few more to come. We’ve given up wiping off the mist that clouds our headsets.”

A farewell party will be held on the platform on Thursday, after which it will be shut down.

8/3 will be the last day AltspaceVR will be available. Thank you for the great memories. https://t.co/SCAT6b16mZ pic.twitter.com/Hd3LmtRB41