Brandis named 'villain of the year' for encryption crackdown 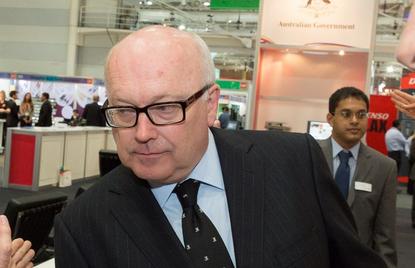 Brandis received the award for seeking the “authority to bypass encryption protections in favour of exceptional access for law enforcement to digital content”, alongside UK Home Secretary Amber Rudd.

“This type of access has been repeatedly demonstrated to undermine digital security globally, including and especially for the users most at risk,” said Amie Stepanovich, global policy counsel at Access Now.

“Attorney General Brandis’ attempts to limit the development and use of the strong encryption we all rely on in an increasingly digital world only serves to infringe upon basic human rights, harm digital security, and hurt Australia’s standing in the eyes of the world,” she added.

Earlier this year the Australian government hyped up the threat posed by criminals’ and terrorists’ use of services that provide end-to-end encryption such as WhatsApp and Telegram.

Brandis denied the government was interested in forcing companies that offer encrypted communications services to create “backdoors” to allow security agencies access. However, the government will soon propose legislation that will require tech companies to “provide assistance to the police to enable them to have access to the information pursuant to a warrant”.

Rudd meanwhile has flip-flopped on whether the UK wants to ban encrypted communications, on one day earlier this year calling it “completely unacceptable” before later admitting “I support end-to-end encryption”.

“Rudd and Brandis represent countries that serve as examples for other government officials around the world, so both are named villains for failing to recognise the critical importance of encryption for human rights in our increasingly connected world,” Access Now said.

Among the heroes of 2017 was independent journalist Marcy Wheeler for her work scouring countless documents from and about the U.S. government to reveal surveillance activities that exceeded the bounds of the law.