The World Solar Challenge over, now the real race begins

Will 2018 be the year of the road-legal solar car? 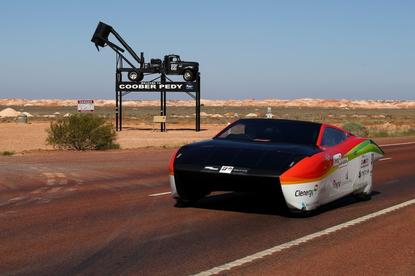 The route is long and treacherous. Completing the journey from Darwin to Adelaide through Australia’s red centre requires a sturdy vehicle and a strong will.

There was also an unseasonable lack of sunshine for most of the course, a major issue when your vehicle’s motor runs on it.

Of the 16 cars that began the 3000km course in the cruiser category of the challenge, only three made it over the finish line within the official time window.

But one of the teams believes their sun-powered vehicle can go much further. Third-placed, Queensland-based Clenergy TeamArrow have their sights set on achieving a world first: a road-legal, solar-powered, luxury car.

For most of last week’s race, TeamArrow’s chief technical officer Cameron Tuesley was bundled in the back of an SUV, eyes fixed on his tablet.

Tuesley’s device was running Splunk and a home-brewed machine learning system to analyse the 600 data points coming off the ArrowSTF cruiser each second, delivered over a kilometre range WiFi network atop the chase car.

“For my sins as a software guy I end up running strategy,” he told Computerworld. “Not very glamorous job. But I have a cool temperature and I’m very close to the esky. Could be worse!”

Like it is for the drivers and passengers in the team’s car up ahead. With weight and power at a premium, there is no air conditioning or sound-proofing.

“We are dealing with temperatures at outside air levels,” Tuesley says, “but that’s the only thing that makes it uncomfortable.”

“The styling cues have been taken from real vehicles. We set out from day one to build a real car. It’s a very spacious car inside. It runs a Lotus steering system. It has commercial suspension. It has normal racing car seats,” he explains.

“The design goal was to be the first Australian road registered solar electric vehicle that was highly desirable to the general population.”

TeamArrow hope to make a road-ready ArrowSTF commercially available by the end of next year. The race is on.

The World Solar Challenge was first held in 1987, the brainchild of Danish-born Australian Hans Tholstrup.

Long considered something of a novelty, there is a growing sense that solar powered cars will one day feature on real roads alongside the gas-guzzlers.

“The point of this challenge is not just to go fast or to develop technology that will never reach the mainstream. Our founder Hans Tholstrup, our faculty, and competitors past and present, are all determined to make sustainable, energy positive, solar electric cars and renewable technology a reality,” says event director Chris Selwood.

“We now turn our attention to the most relevant issue of all – do these cars have what it takes to appeal to the consumer?”

While the – often peculiar looking – vehicles in the challenger class are judged on speed alone, cruisers are judged on their practicality and performance, with marks for comfort and mainstream appeal. TeamArrow made the switch from challenger to cruiser for the first time this year, and were marked in third place overall.

Back at their base in Brisbane, the team is now converting the car to make it road-legal, with much of the focus on the tyres and suspension.

“That will be a world first if we can pull that off because nobody has attempted to take one of these vehicles and make it a genuinely day to day driving vehicle,” said Tuesley, who by day is managing director of IT provider Integral.

TeamArrow are not the first to attempt the feat. UNSW has been trying to get its solar-powered Sunswift eVe car road legal for close to two years.

While states and territories approve vehicles to run on their own roads, the UNSW team sought national registration from the outset.

Documentation for national registration were first submitted at the end of 2015, and the team has been playing “bureaucratic ping-pong ever since” someone close to the project told Computerworld.

The university has hired an independent automotive engineering consultant to help them through the process which is nearing completion. The team is now dealing with a kick-back from NSW authorities, requiring they modify a door latching mechanism.

Others have joined the race too. German company Sono Motors unveiled a fully functional prototype of its Sion solar car earlier this year. The company is now seeking its target of 5000 pre-orders (it currently has close to half that number) to commence commercial production, which is slated for mid-2019.

Chinese firm Hanergy launched four concept solar cars last year, saying it expected to go into production within two or three years. Those plans may have been scuppered by the company’s founder Li Hejun who was last month disqualified from the management of any corporation in Hong Kong for eight years.

Using a solar-powered car for day to day driving will require some changes in behavior by the driver, Tuesley explains. But that needn’t be a chore.

“With these cars – they’re much smaller, they’re lighter, they’re more aerodynamic – you can drive to work, leave it out in the sun in the car park at work, and drive home. You’ll have more power than you had when you left in the morning. So they can genuinely be used as general everyday road going cars, without plugging them in,” Tuesley says.

While the ArrowSTF will have a 1000-kilometre charge range, on cloudy days, drivers can make use of the more than 350 electric vehicle charging stations across Australia, with more being added all the time.

Although that slightly misses the point, Tuesley says. While electric cars are better for the environment since they don’t emit harmful pollutants, they can hardly be considered ‘green’.

“You go and plug your electric car into a wall – the vast majority of Australian power still comes from coal or gas. So you’ve taken your petrol powered car and you’ve basically turned it into a coal powered car,” says Tuesley.

“Even if you’ve got a Tesla, which is great, they’ve got a 100kilowatt battery in them. If I charge up a Tesla in Brisbane it would take three or four days with the biggest solar array I’m allowed to put on my house to charge that car up. So instead I’m charging it out of the wall, from a power station in Ipswich which runs on coal. That’s the reality.”

Solar cars won’t be for everyone, but like Tesla has, TeamArrow may find a market among the rich and forward-thinking. And with Australia’s petrol car manufacturing industry now declared dead, solar cars perhaps promise a new dawn for the sector.

The ArrowSTFs will be built to order – the Gorilla glass coated solar cells are individually handcrafted – and sold for around $250,000.