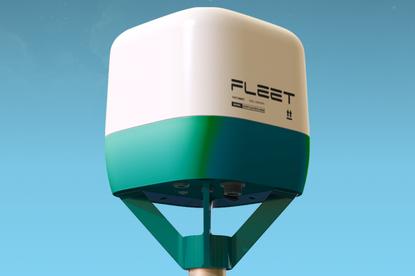 Adelaide-based startup Fleet Space Technologies is a small company with big ambitions: “to design, build and launch the technology that will become the digital nervous system for our planet, drive a connected world and unlock the next industrial revolution.”

To that end it is working to launch its own network of low-earth orbit nano satellites. Those satellites will provide communications links for its gateway devices that will gather data from sensors and other Internet of Things devices. The devices will enable local data processing with embedded edge computing and communicate to the satellites using Fleet Space’s own variant of the LoRaWAN (low powered wide area networking) technology designed for IoT.

David Ball, a principal consultant in the SA Department of State Development, last year during a presentation to a cubesat workshop at UNSW said that Fleet Space would reduce the cost of communication to one hundredth of existing systems.

“There are 60 billion devices coming online, but no one really knows on how to connect them,” he said. “There’s a lot of talk about IoT, but no global standard, no real solution. It’s a mess.

“Cost of coverage is the biggest issue. Infrastructure is too expensive. There is no coverage in remote areas and oceans. Geostationary satellites, WiFi bluetooth, 3G, LTE, LPWAN, drones. They are all too expensive, power-hungry or complex for end-users.”

He claimed that Fleet’s nanosats could cover an area of 4.6 million square kilometres, at a cost of $0.32 per square kilometre — compared to $53 for competing satellite technologies.

Since its launch in 2015 Fleet Space has made considerable progress. In April 2017 it secured series A funding of $5 million; sufficient, it said, to enable it to launch its first two satellites in 2018.

In January this year the South Australian government provided $500,000 from its Future Jobs Fund — to be matched by Fleet Space itself — to fund a mission control centre in SA to manage Fleet Space’s planned fleet of 100 satellites, 24x7. SA Treasurer Tom Koutsantonis said the project would create 17 ongoing jobs in Adelaide and another five jobs during construction.

Fleet Space’s plan is to have five satellites in each in 20 low earth orbits at a height of 580kms by 2020 or 2021, depending on how fast it can secure launch services, and about 12 ground stations to route traffic to and from the satellites.

The company is partnering with ST Microelectronics for these gateways, and in September 2017 it announced it had contracted French company CNES to for in-orbit control of its satellites.

The satellites will take data from the ground stations and hold it until they come within sight of a ground station – communication in the reverse direction will also be possible.

According to cofounder and CEO, Flavia Tata Nardini, this configuration will give the company coverage of about 95 percent of countries and the latency – the length of time a satellite will have to hold data before it sees a ground station — will be sufficiently small for most applications.

Tata Nardini told Computerworld that the satellites were being built in California by Pumpkin Space — a claimed worldwide leader in the nano satellite market — and that the launch partner would be announced shortly.

“The first satellite will go online in July and the second in August or September,” she said.

However Fleet Space is not in the satcoms market per se: Tata Nardini said it would not charge for the communications component of its service.

Its key offering is a gateway device that will gather data from sensors, incorporate edge computing and be accessible via Wi-Fi and Bluetooth. Tata Nardini said it would be satellite agnostic.

Tata Nardini said Fleet Space would take responsibility for the satellite communications component using existing satellites until its own come into service.

Tata Nardini said: “Reekoh is one of the partners we are experimenting with. We have several. We have not gone public with them.”

Fleet Space said also that it would enter into a joint pilot project with Reekoh to “develop relevant plugins and data visualisations to demonstrate managed data.

Reekoh will, under the agreement, develop integrations to the Fleet data network that will provide “additional capabilities for Fleet customers in managing and utilising their data. In turn, this will provide Fleet with commercial and operational opportunities through the use of the Reekoh platform.”

Tata Nardini said Fleet Space had developed its own variant of  LoRaWAN, LoRaSAT, because the LoRaWAN protocol is unable to handle the latency of satellite links — limiting the use of LoRaWAN gateways to areas with cellular coverage or where they can be connected to a terrestrial network.

“The way LoRaWAN was designed, it really needs the cloud to operate, it really needs to be connected to 3G,” she said. “So when you move to remote areas where there is no 3G you need some other form of backhaul.”

Furthermore she said the LoRaWAN protocol was very chatty, which could be costly over satellite links.

“When you use satellites, they are expensive if you have to be constantly talking to the cloud,” she said. “Every time a LoRaWAN gateway communicates to the cloud it sends a lot of headers and extra information. It ends up being a lot of data. With geostationary satellites this means hundreds or thousands of dollars per month.

“We realised that the market was stuck. So we said ‘what if we insert edge computing and bring the LoRa architecture to the edge?’

“That is what we call LoRaSAT. That means you don’t always have to communicate with the satellites. The sensors can talk to the portal at any time. When the data gets into the portal we have added software that allows you to do edge computing.”

Power at the edge

Tata Nardini said the Fleet Space gateways would run a Linux-based edge computing platform, developed by Fleet Space, on which users would be able to run applications to suit their requirements.

Fleet Space has already announced that it will run Amazon Web Services' Greengrass software, which extends AWS cloud capabilities to local devices and makes it possible for them to collect and analyse data closer to the source of information.

“Greengrass is the first application we are running,” Tata Nardini said. “It was built to have an intelligent system offline; it was built for high latency.”

She said Fleet Space envisioned operating an app store from which customers would be able to download specific IoT applications . “Our dream is to find a way that people can buy things online and activate them very easily,” she said. “This year we have produced a lot of end-to-end solutions.”

One of these solutions has been developed in partnership with the University of Tasmania’s industrial transformation research hub, Pathways to Market, and Tasmanian IoT research organisation Sense-T.

The system monitor farm temperatures and soil moisture to give Fleet engineers and University researchers ultra-granular data and develop insights into the challenges facing the Australian agriculture industry.

Tat Nardini said: “More than 61 per cent of Australia’s land mass is owned by farmers and the implications of operating in remote, often harsh, conditions throw up challenges that require urgent attention.

“The untapped potential of IoT devices in transforming the global agriculture industry at a macro and micro level is astonishing. But the remote nature of farming means that right now there’s a severe limitation in the number of devices that can connect to the Internet.”