Why your smartphone needs 5 cameras

By the end of next year, five cameras will be standard on flagship smartphones. Because AI and AR. 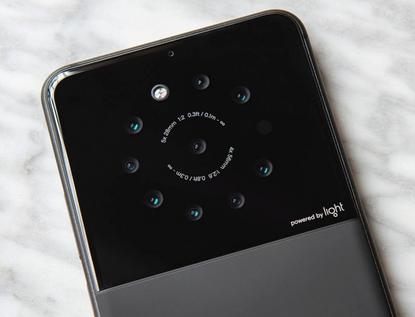 Who knew that the camera in your phone would turn out to be the most popular, useful and important technology in your life?

The human race will take 1.3 trillion photos this year, according to Keypoint Intelligence/InfoTrends. Smartphones will be used for 87% of them.

Most of these pictures are useless and frivolous — not only selfies, but bad selfies that will never even be posted. Don’t even get me started about videos. Smartphone cameras are responsible for the biggest waste of storage space in history.

But a huge number of these photos are valuable for business or professional uses.

Businesspeople of all kinds are increasingly using smartphone cameras as all-purpose sensors for harvesting data from the environment, augmented reality, quick data entry and far more.

Personally, I use my smartphone camera for quick reminders. I take pictures of my hotel room number, the sign that tells where my car is parked, the license plate of my rental car, and anything that will later jog my memory about some task I need to do.

A smartphone app called CamFind lets you take a picture of anything and find information about that object via search. A typical use will bring up places to buy the exact same or similar products, a list of related images and videos, and a web search. It also brings up websites associated with barcodes.

Google Photos offers a similar feature with a newish Google Lens button. The feature will put business card data into your Google Contacts, add a flyer for an event into your calendar and do other useful jobs.

Google’s Translate app will translate foreign languages in real time when you point your camera at any sign or menu.

Another app, called Photomath, will solve any math problem you take a picture of.

Get ready for the smartphone camera explosion

If one rear camera is good, then two are better, right?

iPhone X, Galaxy S9 Plus, LG G7, OnePlus 6 and pretty much every expensive smartphone now has two rear cameras. These provide depth of field, which is useful for “portrait mode” bokeh effects, and the ability to separate the foreground from the background for photo editing. For example, a feature coming from Google will soon enable you to take a color photograph and make only the background black-and-white. Dual cameras also potentially provide better data for AI processing.

Now how about three?

The Huawei P20 Pro, already on the market, has three rear lens and one front-facing selfie camera, for a total of four built-in cameras. One rear lens is a 40-megapixel color camera. The second is a 20-megapixel monochrome camera that provides depth information and also improves the dynamic range of the photos. And the third provides 3x optical zoom.

One standout feature is coming to the phone soon in the form of a software update, which will allow ultra slow-mo video at an incredible 960 frames per second. (That’s impressive, but it shoots at 720p; the Sony Xperia XZ2 has the same frame-rate slow mo, but at 1,080p.)

A total of four cameras is nice. But not as nice as five.

The Samsung Galaxy S10+, which is expected to ship next year, will have five cameras as well. One of them is expected to function as an ultra-wide-angle lens, with a 120-degree field of view.

By the end of next year, five-camera smartphones will be standard kit for flagship phones.

And if you think five cameras is extreme, you should know that a company called Light is expected to announce later this year a smartphone (shown above) that will have nine cameras.

The purpose of all these cameras is identical to the company’s non-phone L16 camera, which has 16 cameras: to enable DSLR-like quality in a pocket-size device. (Critics slammed the L16 camera for flawed software, a high price and poor results.)

The camera is expected to shoot 64-megapixel photos and will probably enable you to take photos now and focus them later.

It’s a great concept. Let’s see if the company can do it right this time.

How to understand the multi-camera craze

But more importantly, they provide higher-resolution data to AI and AR applications.

One stellar example comes from Silicon Valley-based Lucid, which you may know as the maker of the VR180 LucidCam and the brains behind the possibly revolutionary Red 8K 3D camera.

Lucid recently announced a new focus on a software licensing model, where the company will supply the software brains to power advanced smartphone features. The opportunity that enables Lucid’s entry into this market is the advent of dual- and multi-camera smartphones.

The Lucid technology is just an example of what’s possible with additional cameras in smartphones.

The reality is that cameras are sensors, and the most useful kind — especially when built ubiquitously into pocket computers that run apps and are connected at all times to the internet.

Already, smartphone cameras can identify and provide additional information about whatever we point them at. They enable us to harvest visual data from, and see augmented reality objects placed in, the real world. Front-facing cameras can improve security through face recognition.

If you’re like me, and like to use those sensors as data-harvesting machines, strap in. The coming world of many-camera smartphones is going to transform what’s possible with a smartphone.

While the photo nerds will get excited about smartphone photography approaching the quality of DSLR photography, the data nerds should be even more excited. Because smartphones were already far superior to DSLRs for capturing usable data for AI and AR, and multiple cameras are about to make them the most useful business tools ever.