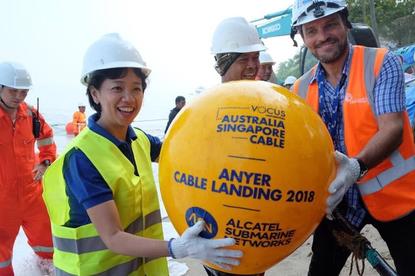 Vocus says that its new Australia Singapore Cable will be ready for service on 14 September.

The telco said that the US$170 million, 4600km cable system was undergoing its final tests. Alcatel Submarine Networks finisihed laying the cable in July.

“The Australia Singapore Cable will provide the newest, quickest and most direct route into Asia with the largest increase of international connectivity for Australia into the fastest growing data region in the world,” said Vocus Group CEO and managing director Kevin Russell.

“The technology deployed on the ASC has been selected to easily integrate with the intelligent network management platform Vocus is currently rolling out, offering superior latency over comparable systems.”

The cable had originally expected to be lit up in September 2019, but Vocus revised its estimate late last year saying it expected a July 2018 ready for service date.

The cable project was acquired as part of the company’s 2016 deal with Nextgen Group.

The cable has four fibre pairs and will deliver 40 terabits per second of capacity. It has landing sites in Singapore, Indonesia and Perth.

Vocus in January said it was boosting capacity on its domestic links ahead of the cable’s completion.

Vocus and Alcatel Submarine Networks have also partnered for the Coral Sea Cable system, which will connect Australia, Papua New Guinea and the Solomon Islands. The federal government in June revealed it had awarded a $136.6 million contract to Vocus for the cable system’s rollout.

Russell said earlier this month that Vocus was engaged in a “two to three year turnaround” after a series of disappointing financial results. The CEO joined the company in May. The network operator reported a net profit after tax of $127.1 million for the 12 months to 30 June — down 16 per cent on the prior year.