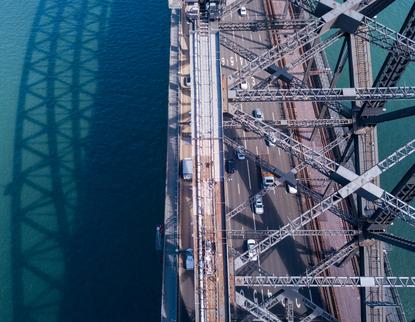 The crew that maintains the Sydney Harbour Bridge speaks about the 52,800 tonne steel structure with deep affection.

To them, the through-arch bridge is “the old matriarch of Sydney Harbour” which “signifies Sydney and our home to us workers” Mann says.

At 86 years old she is in constant need of care and attention. But finding faults along the 1149 metre long deck and 134 metre high steel arch bridge (the world’s tallest) is hard, and often hairy work.

Workers regularly clamber up gantries to carry out visual inspections, and use cherry pickers to get a closer look at hard to access spots. They also abseil off the side of the bridge on ropes – suspending themselves some 50 metres above the water – to examine the underbelly of the road and rail deck.

They are “looking for any maintenance defects, such as rust or concrete cracks” says Mann. But visual inspections are limited in their ability to flag issues, and limited time and funds mean they can only be carried out so many times a year.

Over the last few years, RMS has been using another tool to check the structural health of the old matriarch – an edge computing network with 2400 sensors which measure vibrations in the metal.

Applying machine learning algorithms to the sensor data means the bridge crew is alerted to issues before they appear as cracks on the surface.

As Peter Runcie, new industry and platforms leader from CSIRO’s Data61 group which operates the system explains: “It was only the outside they were looking at. Now we’re looking at the inside.”

Work is now underway to identify faults even sooner; potentially months before they occur.

In the late 1950s, the tram tracks running along the Darling Harbour side of the Sydney Harbour bridge were decommissioned and two extra road lanes put in their place. The lanes – lanes seven and eight – were strengthened with 800 concrete and steel jack arches, each about a metre and a half in length.

“On any bridge it is the deck that works the hardest and is more vulnerable to damage. Structural health monitoring is becoming more important, especially for ageing bridges that have to cope with heavier and more numerous vehicles,” says Mann.

So in early 2014 a group at what was then NICTA (now Data61), developed a small unit consisting of three low-cost accelerometers and a small Linux-based processor. The group attached the units to the arches – one per arch – with epoxy glue, linking them with a daisy-chained Ethernet network and a 1.2 kilometre long fibre optic backbone.

There are also some on-site servers and network control devices, meaning the data the units collect can be transmitted back to Data61’s data centre in Redfern.

“You can measure the vibrations of anything. And if there’s a physical change to that thing then the vibration signature changes,” explains Runcie.

“When a bus goes over the bridge it injects a lot of energy and the vibration [in the jack arches] is very distinct,” he adds.

If there is a crack in an arch, the vibration signature caused by the bus is different. It’s not as simple as alerting crews when vibrations go above or below a set level however.

“The ideal approach is to train an algorithm to recognise normal behaviour and abnormal behaviour. We do that with support vector machines,” says Runcie.

Factors like the weather and temperature have a significant effect on steel, on really hot days the bridge can expand and become up to 10cm taller than usual.

“Temperature effects are a challenge as it changes the way the bridge vibrates,” says Mann.

These variables are included in the training of the machine learning model so it can account for them.

“The beauty is you can keep adding other factors in there. We eliminate variability due to seasons or the day,” Runcie adds.

The machine learning models are being constantly refined by Data61, which is now exploring clustering techniques to further improve accuracy and predict faults.

Work is also being done to incorporate the “ambient vibration” readings from the bridge. These measurements are taken when the bridge is carrying no significant load, which happens only two times a year: when the bridge closes for the Sydney Marathon and on New Years Eve for the firework display.

When refined and updated, the models are pushed back out to the under arch units.

As well as the sensor system, RMS’ Sydney Harbour Bridge crew utilise a fleet of robots to work on the structure.

CROC – developed in collaboration with the Centre for Autonomous Systems at UTS – has magnetic feet and wriggles through the inside of the bridge “like an inchworm” capturing high definition video. Inspectors view the video feed and make an assessment of the paint and steel condition from the comfort of their office.

“There are more than seven kilometres of tunnels inside the arches with hundreds of portholes to climb through and many of our maintenance workers can’t fit through. They are like wombat holes and you are on your hands and knees to get around. It is a very difficult place for humans to work but ideal for robots,” says Mann.

There are also two grit-blasting robots in use – also developed at UTS – named Sandy and Rosie. The bots are able to autonomously sense and map a steel structure, and then plan a collision-free grit-blasting pathway.

“Field robotics is a growing opportunity,” adds Mann. “Robots on production lines have been around for decades, but robots that can think for themselves and undertake high risk mobile activities on construction sites are the way of the future.”

All hands on deck

The crews looking after Sydney Harbour Bridge now keep check on all of the 800 arches using a web-based interface.

“Inspections are now done 24/7 on the full length of the deck by the sensor system and alarms are automatically generated via email and SMS,” says Mann.

There is the odd false alarm, Mann adds, “sometimes the installation of painting platforms will trigger a notice”.

Maintaining civil infrastructure is a costly but essential responsibility of governments around the world. Moving to a more predictive maintenance regime can save time and money and gives crews the ability to plan and budget ahead.

“We know in Australia and in most countries the amount of resources available to maintain these assets is less than is needed. It means agencies need to be smarter about how they manage the assets,” Runcie says.

As a result of Data61’s technology, RMS has changed its approach to maintenance.

“Early detection of any defects allows early maintenance intervention to fix the problem with less effort and expense. Such technology pays for itself and mitigates potential disruption to the travelling public. Computing power enables us to be proactive, rather than reactive, in managing the Bridge condition – so we do maintenance more frequently as a result but the task is smaller,” Mann says.

The agency added that the technology could be rolled out to other parts of the bridge deck.

“It is a risk management tool and is deployed where the likelihood or the consequence of a defect justifies the investment,” Mann says.

Nevertheless, manned inspections will continue into the foreseeable future, Mann adds: “The system is an effective diagnosis tool but not a substitute for human inspections.”