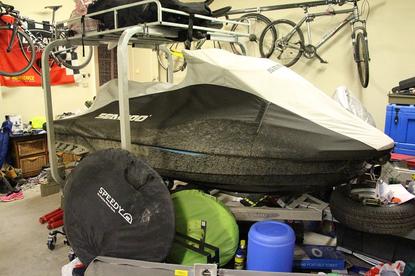 A jet-ski seized by the AFP

A former CSIRO manager today faced a Canberra court for allegedly fraudulently using government funds to make more than $400,000 worth of personal purchases.

The Australian Federal Police (AFP) has alleged that the 44-year-old “abused his position and resources to facilitate the illegal purchase” of a slew of luxury goods including a Lexus SUV, high-end road bicycle, a Sea-Doo jet-ski, television, computer, tablet, smart-phone, clothes, and a fitness tracker.

The CSIRO said it launched an investigation into the senior manager after it “identified a code of conduct breach relating to expenditure” in July 2017.

The individual was dismissed as a result of the alleged breach, and the matter was referred to police.

Within a week of the referral, AFP officers conducted a search of the man’s Griffith home and seized “a number of items of evidence”.

CSIRO said it has since has recovered the money from the individual.

The man faces a number of charges: Dishonestly causing a loss to the Commonwealth, intentionally making a false statement in a statutory declaration, abuse of public office and using a forged document.

The maximum penalty for the offences is a 10-year jail term.

“The alleged conduct of this man is an abuse of public office, and the AFP owes it to the community to investigate and prosecute such matters to the full extent of the law,” she added.