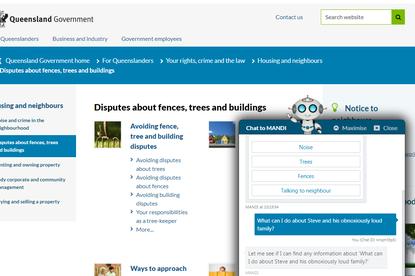 The Queensland government has rolled out two chatbots — dubbed MANDI and SANDI — that are intended to help people resolve disputes with their neighbours.

The chatbots are designed to deal with enquiries relating to issues such as fencing, trees and noise.

The idea for using chatbots to help people access basic dispute-resolution resources came from the Queensland Civil and Administrative Tribunal (QCAT) as well as a 2018 hackathon staged by the state’s Department of Justice and Attorney-General.

The winning team at the ‘Hackcess to Justice’ event, which was staged in partnership with youth-run not-for-profit The Legal Forecast, comprised engineering students Sophia Hooton and Roy Portas from the University of Queensland, and law students Kimia Zarei and Joanne Marie de Jesus from the Queensland University of Technology. The students work worked with the department’s digital transformation team to build a chatbot.

The two chatbots, one housed on Qld.gov.au and the other on the QCAT site, have different approaches to responding with enquiries.

“MANDI is designed to walk people through a guided conversation,” said Queensland’s attorney-general and minister for justice Yvette D’Ath.

“The user selects options from a predetermined list and the chatbot directs them to accurate information to help them resolve a wide range of neighbourhood disputes in a safe and fair manner.

“While SANDI is a conversational chatbot for QCAT, designed to give people information about processes to resolve their tree and fence disputes.

“SANDI allows you to enter questions in your own words and it will provide plain English information and links to relevant QCAT webpages and forms.”

QCAT and Queensland’s justice department are not alone in turning to chatbots as another channel to deal with enquiries.

At a federal level, the Department of Human has rolled out multiple public-facing and internal chatbots. Most recently in November, the department announced the launch of ‘Charles’, which offers support to myGov account-holders.

According to the department, its two original public-facing digital assistants, ‘Sam’ and ‘Oliver’, have handled millions of enquiries.