What if 10 per cent of a city's internet connected cars suddenly stopped? 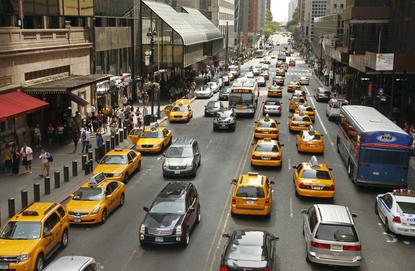 Internet-connected cars with autonomous features like lane assist and emergency braking are becoming increasingly common on our roads.

Such vehicles have the potential to prevent accidents, reduce congestion, and be far more fuel efficient. But there are downsides too.

“These highly anticipated benefits come with largely unknown risks, especially since connected vehicles are potential targets for computer hacking,” writes Skanda Vivek from the Georgia Institute of Technology and his team, in a paper published this week.

Potentially, a successful hack of a vehicle’s systems could distort sensor readings, or suddenly and unexpectedly put the driver in full control. Even if an intrusion was detected by anti-virus-like software it could put the vehicle into ‘safe-mode’ and bring it to a halt.

It’s entirely feasible – in 2015, two hackers wirelessly took control of a connected Jeep Cherokee’s dashboard controls and cut transmission. Working on the assumption that “if it can be hacked, it will be hacked,” the researchers considered the effect a hack of not just one vehicle, but percentages of total cars on the road.

“The scenario we investigate here is one in which a substantial number of vehicles are simultaneously disabled in a single event causing them to become immobile obstacles on the road,” the researchers write.

The team used agent-based simulations to investigate how hacks could impact traffic flow in New York City. They modelled the traffic flows at different times of the day, selecting varying proportions of vehicles to stop on the road, as they might if compromised.

By using percolation theory, a mathematical approach based on the statistical analysis of networks, the researchers were able quantify how these scenarios would play out in real time.

“Surprisingly, we find a relatively modest density of compromised vehicles can immediately halt all traffic flow,” the researchers said.

If around 10 per cent of vehicles in the city were hacked (Honda, Toyota, Ford, and General Motors each account for about this proportion of cars in New York City) during rush hour “city-wide disruption” is highly likely, Vivek and his team found.

“If two manufacturers were compromised, city fragmentation becomes a near certainty,” they noted.

One defence against the risk of wide-spread chaos, the researchers suggest, would be to multiple networks for the connected vehicles, so as to decrease the number of cars that could be compromised in a single intrusion.

“If no more than, say, five per cent of connected vehicles were compartmentalised to the same network or utilised the same network protocols, the chance of citywide fragmentation would be low," Vivek said at a American Physical Society meeting in Boston this week.

"Therefore, a hacker with the intention of causing large-scale disruption faced with this compartmentalised multi-network architecture would be required to execute multiple simultaneous intrusions, which increases the difficulty of such an attack and makes it less likely to occur," he added.

Vivek said he and his team were in full support of connected cars.

“They hold tremendous potential for positive impact economically, environmentally, and, for former drivers no longer frustrated by congested commutes, psychologically,” he said.

“Our work is not in opposition to the future of connected cars…By shining a light on these technologies at an early stage, we hope we can help prevent worst-case-scenarios."