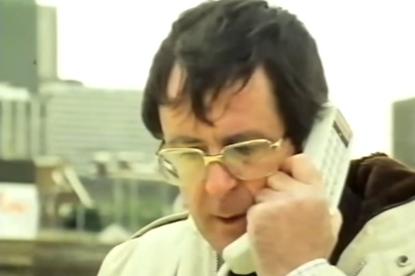 Telstra revealed today that it had connected its 10,000th mobile site, with the 5G site coming online some 32 years after the telco first began delivering cellular services.

In 1987 the government-owned Telecom Australia — which eventually became Telstra — unveiled its first-generation cellular network. However, the roots of mobile telephony in Australia go back even further.

In 1950 the predecessor of Telecom, the Postmaster-General's Department (PMG), began offering a manually connected mobile service based on vehicle-mounted mobile phones manufactured by Amalgamated Wireless Australia. The service only supported hundreds of services in a city and there was a long waiting list for connection, according to a potted history of mobile telephony in Australia by Ian Campbell.

In 1981 a call by Bill Pollock, the managing director of Telecom to Telecom chief commissioner Tom May officially marked the launch of the telco's Public Automatic Mobile Telephone Service (PAMTS or 007 service). At its height the non-cell-based service had some 14,000 customers, with coverage in Melbourne, Sydney, Brisbane, Adelaide, Perth and the Gold Coast.

Then six years later in 1987 Australia got what can be considered its first-generation modern mobile network, based on the Advanced Mobile Phone System standard, leading to the eventual phase-out of PAMTS. Telecom’s 1G AMPS cellular network launched with just 14 base stations in Sydney and Melbourne.

In 1993 Telecom launched 2G services — as did rivals Vodafone and Optus. The telco eventually called time on its GSM network in 2016 (CDMA services were launched in 1999 and shut down in 2008.)

In 2006 the company, by then named Telstra and largely privatised, launched its ‘Next G’ (3GSM) network (an older network, 3GIS, which operated in the 2100MHz band, was rolled out by a Telstra-Hutchison joint venture in 2004, and then shuttered in 2012).

Last year Telstra began declaring mobile sites ‘5G-ready’, gearing up to launch services based on the new standard this year. More than 200 of the company’s mobile sites are now ready to deliver 5G services.

The 5G site announced today by Telstra was in Toowoomba. More than 20 mobile sites are now providing 5G coverage to the regional Queensland city.

Toowoomba is home to an agritech precinct being developed by FKG Group, which chose the city to host a $40 million Tier III data centre. Telstra is providing 5G to the new precinct and FKG has been investigating the potential of the new cellular standard.

Updated to correct the number of Telstra 5G sites in Toowoomba.