INDIGO subsea cable system ready to be lit up

36Tbps-capacity cable system stretches from Singapore to Perth to Sydney 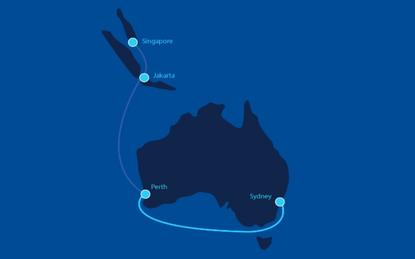 The INDIGO cable system, which stretches from Sydney to Singapore, via Perth, has been commissioned and is ready for use by the six consortium members that funded it.

At launch the cable’s maximum capacity is 36 terabits per second. INDIGO has two fibre pairs and uses an ‘open cable’ design: Spectrum sharing technology allows the cable’s owners to each select their own cable station transmission technology.

The plan for the cable system, formerly known as APX-Central and APX-West, was originally unveiled by SubPartners in 2014.

In April 2017, the INDIGO consortium announced they had struck a deal with Alcatel Submarine Networks to build the cable system.

Installation of the two subsea cables was completed in December.

“The development of the INDIGO cable system strengthens the link between our Australian network and the fast-growing South East Asian markets and will deliver our customers faster connectivity and dramatically improved reliability,” said Telstra’s head of international Oliver Camplin-Warner.

Telstra said it will own 25 per cent of INDIGO West’s spectrum between Perth and Singapore.

“The completion of INDIGO will accelerate the roll-out of next-generation technologies that rely on low latency and high-bandwidth connectivity such as high-definition video, autonomous vehicles, Internet of Things and robotics applications,” said Singtel’s vice president, carrier services, for the telco’s enterprise group, Ooi Seng Keat.

“This will bring us closer to realising the benefits of a hyper-connected future and allow us to enhance our services to Singtel and Optus customers, reinforcing our position as the leading provider of international data services in the region.”

“When combined with the international capacity and interconnectivity to Singapore and Hong Kong, our strategy to virtualise businesses across the Asia Pacific region is now being realised.”

Last year Vocus launched its Australia Singapore Cable (ASC), putting it into service early after an outage on the ageing Sea-Me-We3 (SMW-3) cable system. The 4600 kilometre ASC, which was declared ready for service in September 2018, offers a minimum 40Tbps of capacity.