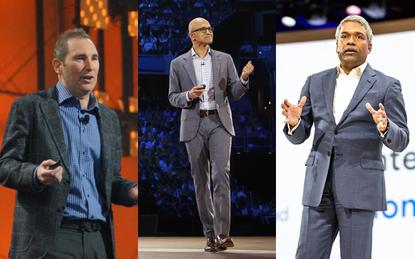 It allows customers to leverage various Azure cloud services from their own data centre and, in theory, eases the transition to the cloud for highly regulated or more cautious organisations. Applications can be built for the Azure cloud and deployed either on Microsoft cloud infrastructure or within the confines of your own data centre without rewriting any code.

Azure Stack brings a set of core services to customers own data centres, such as virtual machines, storage, networking, VPN gateway and load balancing, as well as platform services like functions, containers and database and identity services like active directory.

It is priced in the same flexible manner as Azure public cloud, so you pay for what you use, starting at US $0.008 per virtual CPU per hour, but you will be contracted for software support with Microsoft and hardware support with the chosen vendor.

For a more detailed breakdown of Azure Stack our friends over at Network World have gone under the covers.

AWS signalled its first serious move into hybrid deployments at its re:Invent conference in 2018 with the launch of Outposts, a fully managed service where AWS delivers pre-configured hardware and software to customers' on-premise data centre or co-location space to run applications in a cloud-native manner, without having to operate out of AWS data centres.

"Customers will order racks with the same hardware AWS uses in all of our regions, with software with AWS services on it - like compute and storage - and then you can work in two variants," AWS CEO Andy Jassy said at the time. Those two flavours are: run VMware Cloud on AWS, or run compute and storage on-premises using the same native AWS APIs used in the AWS cloud.

Currently customers can configure their outpost with a variety of EC2 instances and EBS volumes for storage, with the vendor planning to add services like RDS for database, ECS and EKS for containerised applications and SageMaker for machine learning use cases in the near future."

"Symbolically, Outposts is another acknowledgement by AWS that most enterprises want or need to split workloads and data between on-premise systems and public cloud services," Kurt Marko, an independent technology analyst, told Computerworld UK at the time.

AWS Outposts is not yet generally available and pricing information has not yet been announced.

Under the covers, Anthos is a combination of Google's Kubernetes Engine (GKE), GKE On-Prem and the Anthos Config Management console for unified administration, policies and security across hybrid Kubernetes deployments.

It is hardware agnostic and can be run on customers' existing servers or with VMware, Dell EMC, HPE, Intel, and Lenovo racks.

Nick McQuire, vice president of enterprise research at CCS Insight said: "With the arrival of Anthos, and in particular its support of open source, particularly Kubernetes, Google is now taking a much more realistic path in meeting customers where they are on their cloud journeys and is aiming to become the standard in hybrid, multi-cloud services in this next phase of the cloud market."

There are of course other options outside of the big cloud vendors that can help customers run hybrid too, such as Cisco CloudCenter or VMware vCloud Suite.

OpenStack is another option that springs to mind. With the open source alternative customers can bridge the gap between multiple cloud software and hardware vendors, but to do so requires some pretty hardcore skills and expertise within your organisation.