Samsung ads for Galaxy phones falsely indicated a level of water-resistance that the devices do not possess, ACCC contends 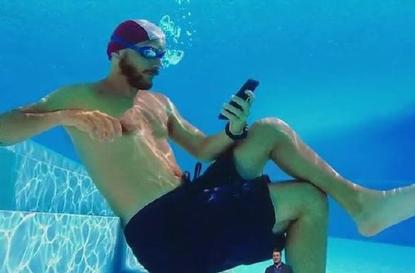 One of the Samsung marketing images the ACCC contends are misleading.

The Australian Competition and Consumer Commission (ACCC) has launched Federal Court action against Samsung, claiming that a series of advertisements by the phone-maker were deceptive.

The ACCC argues that a series of 300 Samsung ads from February 2016 onwards misled consumers about the water resistance of the company’s Galaxy phones.

An ACCC court filing states that Samsung Australia “widely promoted and marketed the Galaxy phones (and continues to do so) on the internet and in other media, including in social media (Facebook, Twitter and lnstagram), television, billboards, radio, brochures, YouTube, email marketing, press releases, articles sponsored by Samsung Australia, at point of sale in its stores and in other retailers' stores.”

Samsung had no basis for making the “the suitable for use representations and the useful life representations” in the ads, the ACCC document states. The company did not conduct or commission “sufficient testing” of the impact of submerging Galaxy phones on their useful life or the impact of liquid other than fresh water on the devices. For example, the ACCC cites a statement on the Samsung website that the Galaxy S10 is “not advised for beach or pool use”.

The phone-maker has also denied warranty claims relating to Galaxy devices damaged through exposure to liquid, the ACCC states.

“Samsung intends to defend the court proceedings brought by the ACCC,” a statement issued by the company said.

“Samsung stands by its marketing and advertising of the water resistancy of its smartphones. We are also confident that we provide customers with free-of-charge remedies in a manner consistent with Samsung’s obligations under its manufacturer warranty and the Australian Consumer Law.”

“Samsung itself has acknowledged that water resistance is an important factor influencing Australian consumer decisions when they choose what mobile phone to purchase,” ACCC chair Rod Sims said.

“Samsung showed the Galaxy phones used in situations they shouldn’t be to attract customers,” Sims said.

“Under the Australian Consumer Law, businesses cannot mislead consumers about their products’ capabilities. Any attempt to do so will risk court action from the ACCC.”

The ACCC said it is seeking “penalties, consumer redress orders, injunctions, declarations, publication orders, an order as to findings of fact, and costs.”