Users of digital platforms like Facebook and Google must have “meaningful control” over their data, commission says 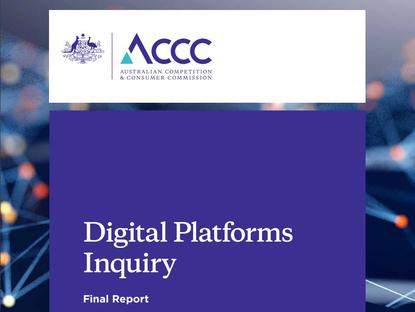 The Australian Competition and Consumer Commission (ACCC) is calling for a crackdown on the “long, complex, vague and difficult to navigate” privacy terms provided by the likes of Facebook and Google, and decried the lack of “meaningful control” users have over their data.

Following a major inquiry into digital platforms, the ACCC has recommended the strengthening and reform of Australian privacy laws in response to the use of citizen data by such platforms.

“We’re very concerned that current privacy policies offer consumers the illusion of control but instead are almost legal waivers that give digital platforms’ broad discretion about how they can use consumers’ data,” said ACCC chair Rod Sims at the release of the inquiry report today.

While acknowledging the ‘bargain’ consumers make with digital platforms – the free use of the platforms in return for their data capture – the ACCC argue that many users are obliged to join platforms given their ubiquity in modern life.

And when they do, consumers have no choice but to “accept their non-negotiable terms of use” which often comes in the form of “click-wrap agreements and take it or leave it terms”, the ACCC said.

Clicking ‘Agree’ gives the platforms “broad discretions regarding how user data is used and also disclosed to third parties” the commission noted in its report. Consumers are not always aware of the true extent of how their data is used, the ACCC said, and their ability to give and retract consent is severely limited.

To counter this “asymmetry” the ACCC is recommending strengthened protections in the Privacy Act. These include higher notification requirements for consumers, so that whenever their data is collected they are alerted in a “concise, intelligible and easily accessible” way “written in clear and plain language”.

Consent would need to be given freely and be “informed” and any settings for additional data collection “must be preselected to ‘off’” the ACCC added.

The ACCC also recommended direct rights for individuals to bring actions or class actions before the courts to seek compensation for an interference with their privacy under the Privacy Act.

In addition the commission recommended legislators introduce a statutory tort for serious invasions of privacy, which has been long called for by the Australian Law Reform Commission (ALRC).

“This cause of action provides protection for individuals against serious invasions of privacy that may not be captured within the scope of the Privacy Act,” the ACCC’s report notes.

“Organisations entrusted with our personal information need to be more transparent and accountable in their handling of our data and their dealings with the public,” said Australian Information Commissioner and Privacy Commissioner Angelene Falk in a statement.

Among its 23 recommendations the ACCC also called for the OIAC to be given responsible for enforcing a privacy code of practice which would apply to all digital platforms supplying online search, social media, and content aggregation services.

“We also need the right safeguards and settings so that Australians can manage their privacy choices and exercise control. These initiatives will also help close the gap between community expectations and privacy practices that fall short of these standards,” Falk added.

The government will finalise its response to the ACCC’s report following a 12-week public consultation.

"We will continue to engage with the Government on the recommendations put forward in this report," a Google spokesperson said in a statement.

“Action on consumer law and privacy issues, as well as on competition law and policy, will all be vital in dealing with the problems associated with digital platforms’ market power and the accumulation of consumers’ data,” Sims said.