NBN Co still in the red, but climbs towards profit 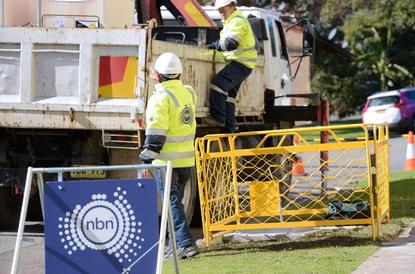 In the 12 months to 30 June NBN Co enjoyed earnings before interest, tax, depreciation and amortisation (EBITDA) of $608 million – if the $2 billion or so in subscriber payments to Telstra and Optus are discounted, the company said today.

That compares to EBITDA, sans subscriber payments, of negative $103 million in FY18. The payments are made to Telstra and Optus as services are migrated off legacy networks, so in NBN Co’s view aren’t indicative of the company’s long-term financial performance.

After a period of relative stagnation, average revenue per user (ARPU) grew to $46, up $2 on the prior year, the company said in its full year results release. The current edition of the NBN Co corporate plan projects ARPU of $51 in FY22, with the document indicating that the increase is expected to be driven by increased end-user willingness to pay, increase takeup of fast services, growth in data consumption and increase business revenue.

The company said today that the FY19 increase had been driven partly by the success of NBN Co’s efforts to promote 50Mbps and faster plans, growing data consumption by both consumers and businesses, and 54 per cent year-on-year growth of revenue in the business segment to $388 million.

NBN Co CEO Stephen Rue described the company’s revenue as a “standout success”. However, it comes in the wake of a new wave of discontent from the company’s customers – the retail service providers (RSPs) that sell services to consumers and businesses – about the cost of NBN services.

Much of that has discontent has been expressed via NBN Co’s wholesale pricing review, with Australia’s largest RSP, Telstra, arguing that the network operator should dump its existing pricing model.

An “industry built around a single, legislated wholesale provider that sets prices in a way that results in zero margins for the downstream retail providers is unsustainable, and can only result in higher retail prices, reduced retail competition, and network bypass,” Telstra argued in its submission to the review.

In March this year MNF Group announced it was exiting residential broadband. Similarly, Amaysim in October 2018 sold its broadband customer base. In February 2019, Vocus, whose brands include Dodo and iPrimus, said it wouldn’t seek to grow its consumer fixed-line broadband base. Vocus said at the time that factors in its decision included the complexity of NBN pricing, a lack of pricing stability and operational complexity.

The NBN Co CEO today lauded the company beating its targets in FY19. However, the company’s revenue, to take one metric, actually falls significantly short of some of NBN Co’s previous forecasts. The NBN Co 2018-2021 corporate plan had forecast revenue for FY19 of $3.5 billion. In the 2019-2022 corporate plan, that had been revised down to $2.6 billion. EBITDA (before subscriber payments) had previously been expected to hit $1 billion; in the revised plan, released in August 2018, that was downgraded to $0.

NBN Co last year cited three key factors in the corporate plan’s downgraded financials: The impact on revenue of pausing sales of hybrid fibre-coaxial (HFC) services while the company addressed problems encountered by end users, the cost of addressing the shortcomings in the HFC infrastructure, and a significant program to improve performance of fixed wireless services.

“FY19 has been the company’s biggest single year of progress on the build and, more importantly, we’ve welcomed 1.5 million new customers to the NBN in the last 12 months,” Rue said today. “And here today, I am pleased to confirm that the construction of the NBN access network – the largest infrastructure project ever undertaken in Australia – is on track and remains on schedule for completion by 30 June 2020.”