Interconnect and telco room launched ahead of P2 completion 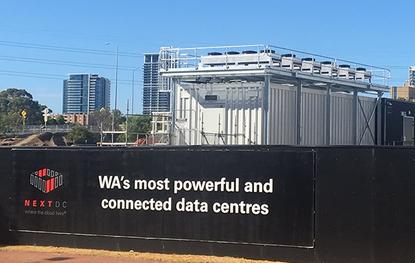 NEXTDC has launched what it describes as its first edge data centre, located within the site of its under-development 20-megawatt P2 facility.

P2 is expected to be completed in the first half of FY20.

NEXTDC said that the new ‘micro data centre’ in the P2 site will support WA-based network operators and provide direct connectivity to major cloud services as well as national and international links (including the INDIGO cable system, which connects Perth to Singapore).

“This is another extraordinary milestone in NEXTDC’s journey, as we learn from our second-generation data centre developments and the cloud landscape as it rapidly evolves. As a data centre leader, we will continue to push the boundaries, constantly striving to find new and innovative solutions to help power, secure and connect our customers.”

The microsite was designed by NEXTDC’s in-house team. The data centre operator says the site acts as a “fully autonomous interconnect and telco room” with full and quarter racks available to network operators, and connects to the company’s existing P1 facility.

“The new P2 microsite is an exciting and innovative piece of infrastructure for Perth, which partners are already signed up to co-locate in and deliver their services from,” Cooper said. “P2 will become central Perth’s most important IT, cloud and connectivity infrastructure platforms and the P2 microsite is set to give it an incredible head start.”

In addition to P2, the company is building out a third Sydney facility (S3) and a third Melbourne facility (M3).