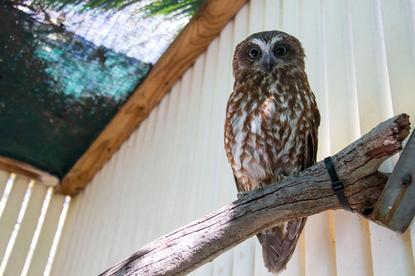 The Boobook owl at the Taronga Wildlife Hospital

With more than two million guests recorded across both sites between 2017-18, Paul White, head of information and digital technology for the Taronga Conservation Society Australia, started put together a digital technology strategy focused around access, empowerment and engagement, as well as around servicing clients and guests.

"And that strategy involves a couple of phases, the first being and uplift the infrastructure, so very much a technology focused, networking, switching, and, of course, Wi-Fi," White said at a media briefing during Aruba's Atmosphere 2019 APAC conference.

Following this, the park will startt connecting the different areas of the group which involves the conservation, science and research space as well as a "retreat" being built within Taronga Zoo.

White said the organisation has "lofty goals" down the track which includes some AI and machine learning aspirations in the conservation space.

Taronga is looking at partnerships around AI monitoring its cameras in the exhibit are so it can track animals in the vicinity, determine it species and whether it is behaving in a normal way or is showing signs of sickness.

"So there's, and that's kind of fairly blue sky, there's a long way to go before we get to that, but it's quite aspirational, something we're really excited. And we can't do any of that without these platforms and things in the back end," White explained.

"So you're a little bit of a school with a university presence. There's a strong research school with a huge faculty building built there. And we're sharing university and education networks. And education is really core to our background. And our customers are very strongly represented from the education sector

There is the new retreat being built – set to open 10 October – which is a hotel within the zoo with 62 rooms overlooking the wildlife, which is also being used as an event space.

"One of my favourite Aruba taglines is 'people move, networks must follow'," said Nick Newton, senior director of Meridian Aruba." That's really, really true, right? People, whether they are the visitors, staff, whoever comes into a space like the zoo, they're moving around and we can't expect the network to just not accommodate. We have to accommodate, and that's what we do."

The initial work took several months as there were complexes being built and Taronga decided to take its time to get that right.

The main benefit of the partnership is that there is no money to be made from anyone so the money that would've been invested can be channelled into conservation efforts," White added.