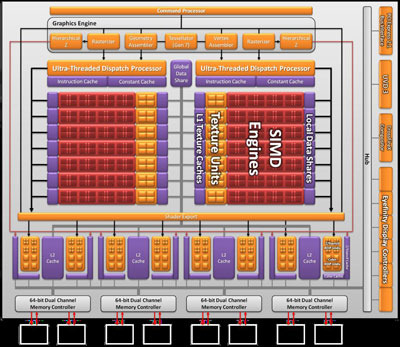 To make a long and quite technical story short: Barts is a lot like Cypress, but scaled back a bit, with some of the difference in performance made up for by higher clock speeds. These cards have a few other neat tricks, too, however.

The Barts GPU that powers the Radeon HD 6850 and 6870 is very similar in design to the Cypress GPU that powers the Radeon HD 5850 and 5870. There's a command processor on the front end, connected to a set of graphics engine features (the tesselator, geometry setup, rasterizer, and so on). This has been tweaked in the case of the Barts GPU to offer somewhat improved tessellation performance, but it is otherwise extremely similar. The texture and shader engine is arranged in much the same way, with a thread dispatch processor and scheduler connected to an array of SIMD shader units. Each SIMD has 16 blocks of five-way vector units, for a total of 80 processing units. There are 14 of these SIMD units in the chip, for a total of 1120 processing units. There were 20 SIMDs in the Cypress chip, for a total of 1600 processing units. The Radeon HD 5850 had a scaled-back version with two of the SIMDs disabled, just as the new Radeon HD 6850 has two of the Barts GPU's SIMD units disabled.

UVD3: The new models will offer hardware acceleration of a greater variety of video formats. AMD calls the video decoding engine in its GPUs "UVD," and the Radeon 5000 series featured the second-generation UVD2 engine. The 6800 series introduces the third generation, UVD3. New to this generation of the engine is enhanced quality, the ability to decode the Multi-View Codec used by Blu-ray 3D discs, better support for MPEG-2, and support for MPEG-4 Part 2 (used in the DivX and Xvid codecs). All this is above and beyond the VC-1 and H.264 decoding features found in UVD2.

DiplayPort 1.2 and HDMI 1.4a: The Radeon HD 6850 and 6870 are the first graphics cards to offer a couple of new display output standards. The DisplayPort outputs have been upgraded to the new DisplayPort 1.2 specification, which supports higher resolutions and allows users to daisy-chain multiple monitors from a single output. This capability renders six-port Eyefinity 6 editions all but obsolete, especially when monitors supporting DisplayPort 1.2 become common. The HDMI output has been upgraded to version 1.4a, which supports higher resolutions and color depths in addition to full 3D support in hardware.

New Display Output Arrangement: The standard array of display outputs have been upgraded over previous Radeon cards. The reference for the Radeon HD 6850 and 6870 is two Mini DisplayPort outputs, a single HDMI port, and two DVI ports (one single-link and one dual-link). Individual card vendors may stray from this standard, but most of them probably won't.

Hardware Per-Display Color Correction: A small but important feature for multiple-monitor users, the new display controller allows color gamut correction per-display in hardware, so you can color-match different displays with different resolutions and timings without a performance penalty.

HD3D: This is AMD's brand for its support of the Open Stereo 3D Initiative, which it announced earlier this year. The idea is to enable 3D support through a wide array of methods (active-shutter, polarized glasses, glasses-free, and more) with various monitor and TV manufacturers. Support is relatively slim at this point, but iZ3D and DDD support the technology today and can enable 3D in dozens of games and other applications, with more on the way. The Radeon HD 5000 series will get some of this support through a driver update, but only the new 6000 series cards have fully hardware-accelerated 3D Blu-ray capability and the support for 3D features of HDMI 1.4a.