Remove the metal RAM cover on the right. The captive screw should stay with that plate.

Remove the remaining hard-drive screw. Slide the drive to the left to unseat it from the SATA port. Remove the drive.

Within the keyboard cavity, remove the screw from the lower-left hole and the two screws on the lower edge on the right. The latter two sit on either side of the RAM. All of those screw holes are marked 'M2.5X5'.

Above the touchpad, remove the cable inside of the rectangular hole in the plastic. Gently lift up on the connector tab, again with a tool or fingernail, to release the cable.

Unplug the power-button cable at the top, middle of the case. Be careful to separate the cable plug from its socket. Instead of yanking on the wire, try to separate those two parts with tweezers or the dull edge of a hobby knife; they fit tightly.

Starting from the gap you created, work guitar picks into the seam around the rest of the case, in front of the display. You'll likely need to leave some picks wedged in place as you work further, since the tight seam might clasp shut behind you. Remove that large, plastic part. 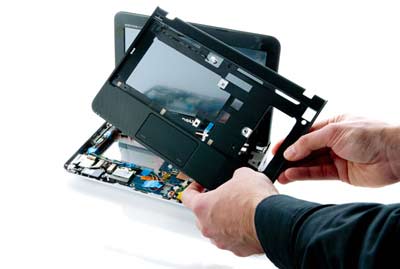 On the display, use a hobby knife to pry off the rubber adhesive feet on the lower corners. Store those pads in the pillbox or somewhere else for later. Remove the two exposed screws.

Separate the front of the display housing from the back. Use guitar picks again, and gently work from the inside of the screen for better leverage. Avoid scraping the screen; lift the housing up slightly, and pry inside to release it.

Returning to the base of the laptop, near the front, remove the screw from the upper-left part of the Wi-Fi card. The card will pop out the way RAM does. It will still be attached to its two wires. Remove the card and set it to the left side of your workspace; loosen those wires from their tape and tabs as needed, but leave them attached. 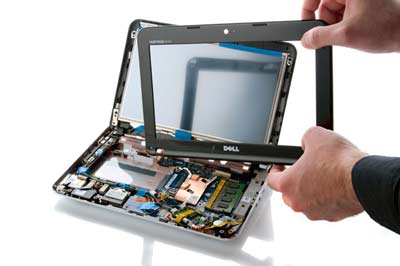 Remove the thick socket cable at the top-right side of the motherboard that leads to the display. Carefully separate it by pushing the edges with tweezers or another fine tip.

For this next step, you'll want to keep the display at 90 degrees, because you're going to remove the display and its connected housing now. Remove the three hinge screws that mount to the base, next to the motherboard. One is on the top-left side, in the general area of the VGA port, another is on the top-right side with an attached grounding loop wire, and the last is behind the display on the back-right corner. 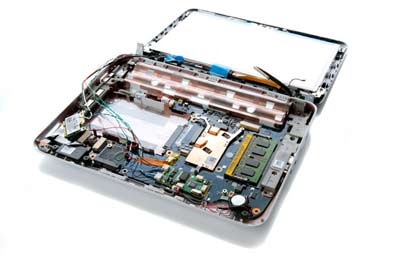 As you remove the screws, keep one hand propping up the display so that it doesn't fall. Once the display is free, set it behind the base of the laptop, as if you were opening it 180 degrees.

Remove the screw on the left of the base, generally near the USB ports. It's marked 'M2.5X5'. Remove the gray housing part that you just freed underneath.

Detach the flat, black ribbon cable from the lower left of the base by gently lifting and tilting the black tab in the socket. Use tweezers or other tools as needed. Lift the cable straight up.

Detach the cable connecting the main motherboard with the secondary circuit board on the left side of the base. This junction is next to the previous cable, and your target is the socket with the snarled, individual wires. Remove the screw underneath that cable.

Solder to the Netbook

Lift out the L-shaped board that holds the two USB ports, flash card slot, and VGA port. This is our target point to solder the touchscreen controller board cable to the laptop.